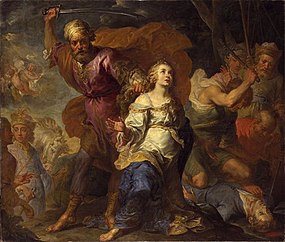 Loretta and I were living in northern New Jersey and had two sons; Larry Jr was six, and Billy was two. We were hoping to have a girl, but Loretta had been told that she would never have any more children. We were disappointed but okay with the report. We had, after all,  been blessed with two healthy sons.

My mother-in-law had been visiting St. Benedict’s Abbey in Massachusetts. On the way home, she had planned to stop at our house and stay a few days. When she arrived, and while still walking into the house,  she said, “Wait until you see what I have.”

She reaches into her oversized purse and pulls out a beautiful gold container. “What is it?” I ask.

“Look inside the glass. It is a first-class relic of St. Dymphna. She is the patron saint of mental and emotional disorders. I asked the priest at St. Benedict if I could borrow this for Marion and Kelly (Marion was her granddaughter). I’m going to bring it to the hospital, touch it to both of them, and ask St. Dymphna to help them get better. They actually let me borrow it.”

Kelly was 16, and Marion was 14. Both suffered from Anorexia Nervosa. Kelly was down to about 45 pounds, and Marion, two years younger, was hovering around 65 pounds. My mother-in-law wanted desperately to help these girls who were slowly killing themselves.

My brother-in-law, Howard, came by later that afternoon, and he took his mom to visit the two girls. She held the relic next to each girl’s chest and prayed to St. Dymphna to intercede with God to help them get well. Time would tell how God would respond.

Doctors thought that Kelly would not survive, but both girls did miraculously recover. But the real surprise for me came about six weeks later. Loretta and I had the babysitter come over, and we headed to Luigi’s Italian restaurant. As we ate our lasagna, she said to me, “Oh, by the way, I’m pregnant.”

Holding a fork with lasagna stuck to it in front of my mouth, I stared at her. A moment or two passed, and as tears ran down her face, she said, “I used the relic.”

Unknown to me, she had taken the St. Dymphna relic and, holding it to her womb, prayed to the teenage saint. She asked her if she could help her with pregnancy issues. Seven and a half months later, our daughter was born. We named her Mary Dymphna.

The next day I was visiting Loretta, and, as she lay in her bed holding Mary Dymphna, an elderly lady poked her head into the room. She was delivering newspapers and nervously said, “I never speak to patients, but for some unknown reason, I felt I had to talk to you. Could you please tell me your baby’s name?”

We both looked at each other, and Loretta said, “Sure, its Mary Dymphna.”

So help me, this old lady started crying and said, “I knew it, I knew it. St. Dymphna saved my life a long time ago. I knew this baby had something to do with her.”

The lady came over, touched Mary’s face, and looked at her. She was seeing something we could not. It was an inexplicable spiritual moment that was born of faith. So, who was St. Dymphna, the teenage saint from 7th century Ireland who personally stepped into our lives so many years ago?

Dymphna was the daughter of a pagan king by the name of Damon. Her mom was Christian. When Dymphna was fourteen, she took a vow of chastity and dedicated her life to Jesus. Shortly after that, her mom passed away, and her father became very distraught. Under pressure to remarry, Damon insisted that any new wife would have to resemble his first wife. His aides searched far and wide but could find no one who resembled the dead queen, no one except the king’s daughter, Dymphna.

Damon, losing all sensibilities, demanded that Dymphna marry him. Horrified at such a demand, Dymphna and her confessor, Father Gerebernus, fled Ireland and landed in Belgium. After a while, King Damon tracked them down. He had Father Gerebernus killed and demanded that Dymphna return with him to Ireland. She refused. Her own father drew his sword and cut off her head. She was 15 years old.

When they discovered the remains of St. Dymphna, miracles began happening immediately. People with varied cases of mental illness were cured. In honor of the teenage saint, a church was built in Gheel, Belgium. To this very day, people in Gheel will always accept the mentally ill into their homes without question. Sociologists still study the success of this phenomenon.

The connection between me, my family, and St. Dymphna is a beautiful thing. So I will end with the following. The teenage saint is known as the “Lily of Eire” because of her virtue. My mom’s name was Lily. My daughter, Mary Dymphna, was baptized at St. Mary’s Church in Dumont, N.J. The US National Shrine of St. Dymphna is located at St. Mary’s Catholic Church in Massilon, Ohio.

St. Dymphna is the patron saint of those suffering from; mental disorders, incest victims, victims of sexual assault, depression, sleep disorders, and of runaways.

St. Dymphna, please pray for us all (Feast Day is May 15)

“I have heard their prayers. Assure them that as of this day, their suffering has come to an end”.

There is a town located in Italy called Cursi. It is in the Apulia region of southeast Italy, and if you look at the map of the country, it is located on the heel of the boot. It is about as far southeast one can go before coming to the Adriatic Sea. It was in the seventeenth century when the Blessed Virgin came to this town and, reaching out with love and tenderness, saved all the people.

It had been three years since a drop of rain had fallen in the region. It was now 1641, and the summer heat was turned up full. The drought had led to famine, and the famine led to a lack of work. Sickness had erupted and began to spread among the people. Things had become genuinely desperate and even water to drink was getting scarce. The people had been praying every day to the Blessed Mother for help, but no relief appeared in sight.

It was in  April of 1641, (the actual date is unknown) that the son of a cattle farmer, Biagio Natali, was out herding some stray cattle back to the farm. Near the pasture was a chapel that had been dedicated to Our Lady.   Next to the chapel, near the edge of the road, was a barn. Inside the barn, on one of the walls, was a fresco someone had painted  (artist unknown) of the Madonna and Child.

As Biagio passed by the barn, he noticed a strange light coming from inside. He stopped and looked, and the light seemed to get brighter and brighter. Suddenly, the figure of the Mother and Child came from inside the light. Biagio fell to his knees and a beautiful voice said, “Don’t be afraid. I am the Queen of Heaven. Return to your village and try to placate your neighbors. I have heard their prayers. Assure them that as of this day, their suffering has come to an end. As a sign of my protection, you will have an abundant harvest.”

Realizing that the Madonna and Child were no longer there, Biagio got up and ran to Don Giovanni Domenico Coccioli, the parish priest. Don Giovanni was overjoyed to hear this message. He told Biagio that he had received a similar dream. The priest was so excited to hear Biagio’s story that he immediately ran out to announce the news to the people of the city. He organized them into a procession and all the townsfolk began marching while praying and singing in honor of Our Lady and Child. What an incredible faith the people had; nothing had yet to happen.

As the people processed toward the sight of the apparition, the clear, blue sky began to cloud over. The clouds grew darker, and the rains came down. The rain poured down for three days and nights with the fields soaking up every drop of the precious water. Since it was only April, the harvest that year was abundant. The famine ended, and the local granaries and cellars were filled with wheat and fruit.

The people of Cursi wanted to find a way to show their sincere gratitude to the Blessed Mother. They decided to enclose the small chapel and barn within a large church that would surround it. The fresco would be saved within the new church and hopefully become a place of pilgrimage. The church was finished in 1650 and, as hoped for, immediately became a popular place to visit. It was called the Sanctuary of Our Lady of Abundance. Biagio left his work as a farmer, donned the clothes of a hermit, and vowed to spend the rest of his life in prayer and fasting while looking after the shrine.

Some years after the new church was built, it was hit by lightning and it burned down. A bigger and more beautiful church was built with a magnificent sanctuary. In the sanctuary, above the high altar, is a Greco-Byzantine fresco of the Madonna of Abundance (sometimes called the Madonna of Prosperity). In it, the Blessed Virgin holds the Divine Infant and in their hands, they are holding sprigs of olives and ears of corn.

The Shrine is not only known for the “abundance” of rain but it is also a place for nursing mothers who lack the necessary milk to nurse their babies. Those who invoke her intercession are said to often develop an “abundance” of milk.

The shrine in Cursi is opened daily and Mass is offered at 5:00 p.m in the winter and at 6:00 p.m in the summer with the rosary preceding Mass.