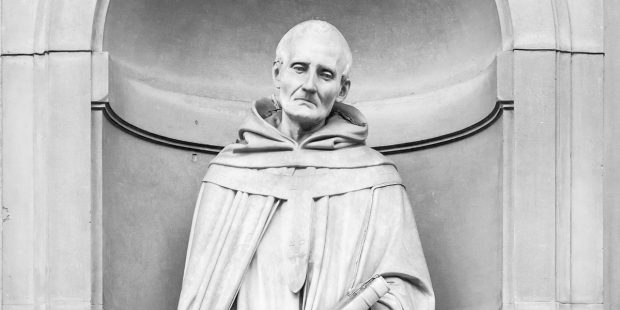 Antonio Pierozzi was born on March 1, 1389, in Florence which, at that time, was an independent republic. His father, Nicollo, was a notary which was considered an upstanding position in the community. His mom died when he was five years old, and his dad remarried the very same year. His “new” mom helped raise him, but her influence in his life seems minimal.

Antonio came from a very religious family. He had a sister who became a nun, an aunt who was a nun, and a brother who entered the religious life. His other sister married and became a Third Order Dominican. As for Antonio, from early on he was an extremely pious child and he spent one hour a day in prayer in front of the Crucifix in the garden at the nearby church. Many people noticed his piety and his reputation as being holy began to grow. Also, Antonio was very smart and was quickly recognized as being a brilliant student.

Antonio had heard a sermon by Blessed Giovanni Dominici and was instantly drawn to this man. Dominici was the leading preacher of his day and had received his authority from Blessed Raymond Capua who was the first follower of St. Catherine of Siena. Antonio’s future was now a brightly lit path for him to follow. He asked John Dominici to receive him into the Dominicans.

Antonio was only fifteen years old at the time, and John Dominici thought he was still too young. He even thought he might be too small and too weak to live such a life. So he challenged Antonio. He told him to memorize the Decretum of Gratian, a complex work of Canon Law.

His motive was to overwhelm the young man while not hurting his feelings. He was sure Antonio could never fulfill such a request. He was wrong. One year later Antonino came back to John Dominici and recited the entire work. He even answered hard questions after doing so proving he understood the nuances and meanings as set down. At that time he was received into the Dominican Order.

A new priory had opened in Fiesole, and Antonio received his habit from John Domenici. The first years of Antonio’s life as a Dominican are vague, but it is recorded that he kept growing in sanctity, spent hours in prayer, fasted constantly, and studied as much as possible. Then he moved to Cortone and met Lorenzo di Ripafratta. Lorenzo was a prominent force in the reform of the Dominicans which had, in many areas, turned from the principles the order had been founded upon.

His age mattered not because he was made an administrator and put in charge of communities in Rome, Naples, Cortona, and  Florence. All of these places now fell under the reorganized Dominican Congregation of Tuscany which had been created to get the Order back to its founding principles.

From 1433 to 1446 Antonio served as Vicar of the Congregation. He followed the rule as set in place by Blessed John Dominici and believed that he should care for his novices as Christ cared for His apostles.  He was determined to do his best to instill in them the spirit of the Beatitudes which would sum up the Order’s Rule. He was also very strict on poverty. All that was necessary to the operation of a household would be sold and given to the poor.

It was during this time that Antonio founded an organization called: Buonomini de San Martino. This was something like the St. Vincent de Paul Society except it was designed to help poor people of high social status who were living in shame because they had become poor. This organization became a huge success. Much money was collected and many of the “hidden” poor were helped. The people began calling him Antoninus the “Father of the Poor,” a name that is still used.

The last words of St. Antoninus of Florence were: “Servire Deo regnare est”, “to serve God is to reign.”