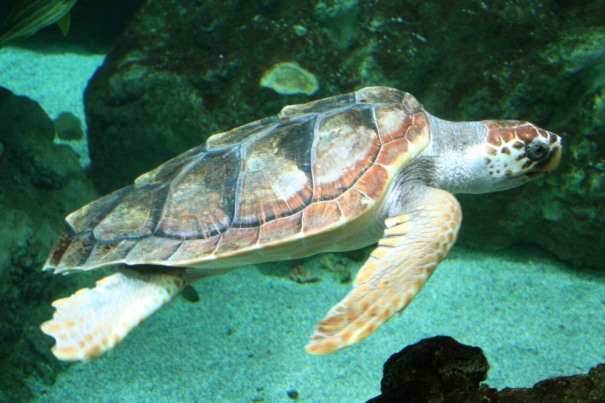 In Florida, sand as white as snow curls up the Gulf Coast from Naples north to the panhandle area with some of the most beautiful beaches on the planet. People come from all over the world to visit these beaches and bask in the brilliant Florida sun and fish and swim in the calm and clear Gulf waters. But there is one thing these folks and all folks had better not do while visiting these beaches. If they do not want to wind up in jail, they had better avoid the Loggerhead Sea Turtles. They are on the Endangered Species List and they nest on the beaches.

We have in place in this country a law called the Endangered Species Act. Under this act wildlife considered “endangered” are protected by law from being killed, maimed or harmed in any way. There are many good points to this law as some of our most revered wildlife, like the Bald Eagle, have been saved from possible extinction. But, what about the “Baby People”? Don’t they count?

The Loggerhead Sea Turtle is one of these protected turtles. It can be found (like baby people) all over the world. However, its primary habitat is the Florida coast north to Virginia. It is estimated that these turtles build 67,000 nests a year along the beaches. The female lays her eggs in the sand and buries them. After two months they hatch, crawl to the sea and begin their lives. Of all the hatch-lings maybe 8000 baby turtles survive.  They will live close to 60 years.

It is illegal to harm, harass, or kill any sea turtles, their eggs, or hatchlings. It is also illegal to import, sell, or transport turtles or their products. It is perfectly legal to kill baby people who have not been born. In the United States, since Roe vs Wade was passed in 1973, over 58,000,000 abortions have been performed. Fifty-eight million baby people have been vanquished from existence, many of them burned alive via the Saline Abortion method. That extrapolates out to 1,348,837 baby people a year killed in America.

In 2014 there were 3.93 million births in the United States. That means that approximately one out of every four pregnancies in our country results in a life extinguished. Sea turtles are given every chance to survive with the government going so far as to put people in prison who might interfere with their survival. On the other hand, baby people are welcomed into legalized and sweetly painted extermination camps and, unmercifully and without fanfare or emotion, eradicated.

Whatever are we doing? We civilized people have allowed a portion of our past to be destroyed. We are allowing our present to be vilified by what can only be called a great lie fabricated as the virtue of “helping” women. We have short-circuited the future of our children and grandchildren by taking away from them the possibility of another Rembrandt, or a Mozart or a Jonas Salk, or a Martin Luther King Jr., or even an Abraham Lincoln living among them.

There is a world wide abortion counter that ticks off the abortions around the world as they happen. Look for yourself. More than one life a second is being aborted. Genocide of the innocent, living in and out of the womb, is rampant on planet Earth. Whatever have we wrought?

As the great St. John Paul II said, “A nation that kills its own children is a nation without hope.”