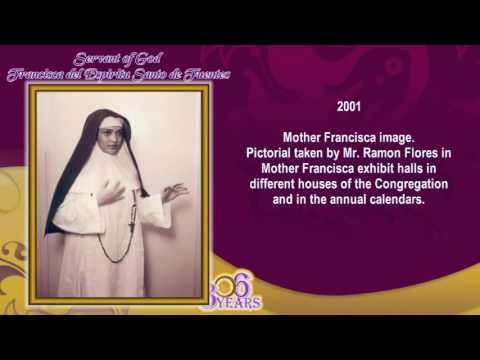 Francisca de Fuentes was born in Manila in 1647. Her father was Don Simon de Fuentes, a Spanish nobleman and her mom’s name was Dona Ana Maria del Castillo y Tamayo. She was a true native to the islands and was quietly known as a Spanish mestiza (a woman of mixed race).

Francisca’s parents raised her into a  true lady, and when she was around nineteen, she was given in marriage to a young man who took ill and passed away shortly after the wedding. Suddenly, she was a twenty-year-old widow with no children, and in 1667 Manila, that was not a good position to be in. A caste society existed, and widowed women, especially a mestiza woman, did not fare well being in such a position.

However, Francisca was a woman of deep faith. She was able to peel back the cloud of her grief and glimpse the silver lining that led her closer to God. He was calling her, and she delved deeply into prayer and began helping as many poor and sick in the city that she could.

It was the 17th century, and in the colonial  Philippines,  women were far from being liberated. Francisca was also a mestiza, which put her in a “class” below the pure Spaniard. She wanted to start a religious order for Filippino women. However, she would be confronting a daunting challenge to do so. It would be a man’s world she needed permission from.

She then had a vision of St. Dominic and St. Francis. Both were calling her and she had to choose. She bowed before St. Dominic and chose to be a Dominican. In 1682 she was admitted as a Third Order Dominican and picked the name of “Francisca del Espiritu Santo.”

She was joined by her sister, Maria Ana de Fuentes, Sebastiana Salcedo, and Antonia de Jesus Esquerra. The four lived separately but wore their habits in public, helping the sick and needy and spending hours together in prayer. They became known as “beatas” (blessed) because they frequented the sacraments and set fine examples of humility and devotion.

In 1686, Francisca sent a request to the Director of the Third Order asking if she and the other tertiaries could live together. The four sisters prayed long and hard, fasted, and did penance that their prayers might be answered. On January 11, 1688, the Master of the Order, Father Antonino Cloche, OP, confirmed and approved an order establishing that a house for sisters of the third order be established in Manila.

One of the original tertiaries, Antonio de Jesus Fuentes, was ill and dying and bequeathed her house to the others. She appointed Father Juan de Sto. Domingo, OP, as executor. Upon her death, they moved into their first official convent, known as a “beaterio.”

The order grew, and on July 26, 1696, the feast of St. Anne, the beatas professed to the Order of Preachers, under a rule drafted by Fr. Juan de Santo Domingo. Sister Francisca de Fuentes was appointed the first prioress and the convent was called the Beaterio de Santa  Catalina de Sena (Convent of St. Catherine of Siena).

In 1697, the new Archbishop of Manila, Diego Camacho y Avila, arrived. This became known as the “Visitation Controversy” because he decreed that the local bishops take charge of the parishes within their jurisdiction. This created much friction among the religious in the Philippines and they rose up in protest against the new rules. Caught up in this controversy was Sister Francisca and her followers.

The controversy grew into accusations of improper behavior, administrative incompetence, and other things. It was so bad that to avoid further scandal, the Dominican friars dispensed the beatas from their vows and sought shelter for them as secular women. They were sent to the College of St. Potenciana where they were to seek “absolution from the archbishop” and wait for the return of their beaterio.

In 1706, after many letters and petitions and negotiations by intermediaries, the Archbishop restored the Beaterio to full participation, under the Third Order of St. Dominic. It had taken nine years, but Sister Francisca and the beatas were restored to their rightful place among the Dominicans.

Sister Francisca made the Holy Eucharist the center of the community’s spiritual life and under her motherly watch the beaterio grew, and many young, native girls began joining the order. Today the Congregation of the Dominican Sisters of St. Catherine of Siena has  locations all over the world.