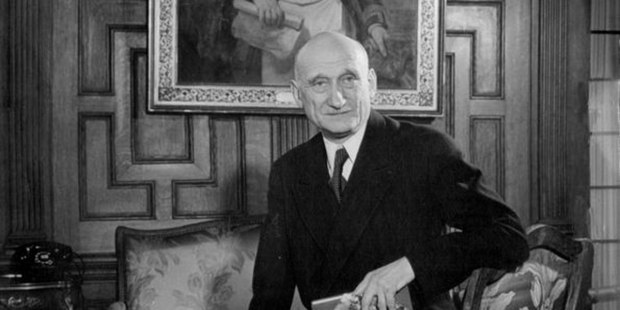 He was the Prime Minister of France and a Founding Father of Modern Europe. He is now climbing the ladder to Sainthood

Robert Schuman was born on June 29, 1886, in Luxembourg. His father, Jean-Pierre Schuman, was a native of Lorraine. When his country was annexed by Germany in 1871, he was made a German citizen. Always French, his father left for Luxembourg, and his German citizenship was inherited by Robert. Robert’s mom, Evange Duren, also came from Luxembourg.

Robert’s secondary schooling took place from 1896 until 1903 at Athenee de Luxembourg. From there, he would move on to study law, economics, theology, philosophy, politics, and statistics at the University of Berlin. He received a law degree with the highest honors from Strasbourg University.

In 1912, Robert set up a law practice in Metz. When war broke out in 1914, he was called up by the German army but was excused from service because of poor health. From 1915 to 1918, he served in an administrative capacity for the German government. After the war ended, Alsace-Lorraine was returned to France, and in 1919, Robert became a French citizen.

Robert Schuman quickly became involved in politics. In 1919 he was elected as a member of the Chamber of Deputies. He was instrumental in drafting the reintroduction of French Civil and Commercial codes in Alsace-Lorraine, formerly under German control. Schuman also began investigations into the corrupt steel and railroads industries.

At the beginning of World War II, Robert, who possessed keen insight into the methods of the Germans, was asked to become a member of the French government as the man in charge of the refugees. The Nazis took control of France in May of 1940. As a member of French National Assembly since 1919, Schuman was immediately high up on their radar.

Arrested by the Gestapo

Robert was arrested by the Gestapo on September 14, 1940. The charges were “resistance and protest against Nazi methods.”  He was about to be shipped to Dachau when a German lawyer, who knew him well, intervened. His efforts kept Robert in prison in France. Robert managed to escape in 1942 and immediately joined the resistance. He worked with them until France was liberated in 1944.

After the war, Robert Schuman was a busy man. He was a founder of the Popular Republican Movement (MRP).  He served as Minister of Finance in 1946, Premier (Prime Minister) from November 1947-July 1948, and Foreign Minister from July 1948 to December 1952. In 1950, while Foreign Minister, he developed the Schuman Plan. This plan led to economic and military unity between Germany and France.

Besides participating in all of the aforementioned capacities, Robert Schuman was instrumental as one of the founders of the European Union and NATO. From 1958 to 1960, he was the first President of the European Parliament. At the end of his term, they awarded him the title of “Father of Europe.” In addition, the 1964-1965 academic year at the College of Europe was named in his honor.

Robert Schuman was a devout Catholic and a Bible scholar. His role in trying to break the seemingly never-ending cycle of wars in Europe has been praised by several popes. He was a proponent of the writings of Pope Pius XII, who despised fascism and communism. He was made a Knight of the Order of Pius IX. He was an expert in medieval philosophy, specializing in the writings of St. Thomas Aquinas. His quest for peace among people and nations was always rooted in his Catholic faith.

On Saturday, June 19, 2021, Pope Francis placed Robert Schuman on the road to sainthood by recognizing him as a man of “heroic virtue.” This means that Robert Schuman now holds the title of Venerable Robert Schuman.