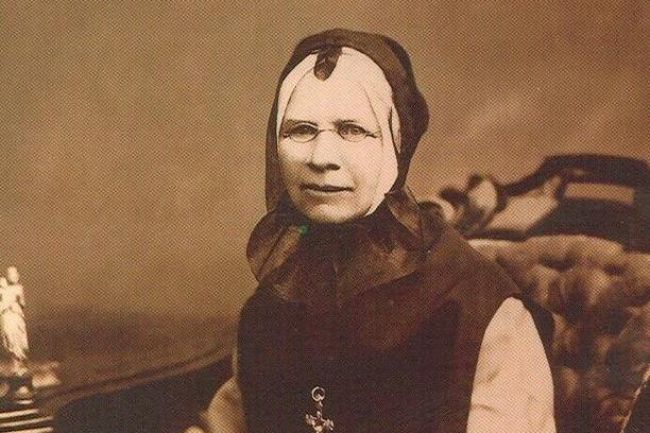 Marie-Anne-Marcelle Mallet was born on March 26, 1805, in Montreal. Canada. Her father, Vital Mallet, passed away when she was only five, and his passing immediately changed the direction of her life. Her mother, Marguerite, unable to provide for her children’s education, sent Marie and her brother to live with an aunt and uncle in Lachine. Marie’s new guardians sent her to the nearby monastery of the Congregation of the Sisters of Notre-Dame, where she would spend most of her growing years as a boarder.

Marie-Anne, having lost her dad to death and her mom to circumstances, became extremely sensitive to the confusion and disruption that had become part of her very young life. She quickly developed and displayed a natural empathy for the poor and downtrodden. As she grew, she was drawn to religious life as she saw this the best way to help those in need. She decided to join the Sisters of Charity of the Hospital General of Montreal,

This order, (also known as the Grey Nuns of Montreal), was the first religious congregation founded in Canada. Marie was admitted as a postulant when she was sixteen. Two years later, on May 6, 1824, she was allowed to enter the novitiate. On May 18, 1826, she professed her vows. Her primary duty from that point on was to care for the sick.

In 1846, Sister Marie added to her job description when she began visiting the sick and home-bound. She discovered she loved being part of this ministry, and the people she saw came to know and love her. But in 1847, Typhoid struck Montreal.  It was Sister Marie who instinctively put her organizational skills to work. She was appointed assistant superior and assumed complete responsibility and supervision of the hospital and staff.

Her leadership and guiding hand saw her assist in establishing new hospitals in such places as Manitoba, Ottawa, and Quebec.  She was chosen to be the leader of the new Quebec Mission, and this move required her to leave her order and found a new one. On August 21, 1849, Sister Marie Mallet cut ties with the Sisters of Charity of Montreal and founded the Sisters of Charity of Quebec. She and her five followers were immediately faced with a daunting task.

Quebec was going through a terrible time in its history. The city was recovering from its second destructive fire when a cholera epidemic struck. Mother Mallet and her companion sisters, had come to “care for the sick and educate young girls.” Based on the circumstances they confronted, Mother Mallet first ordered the establishment of a relief service for needy schoolchildren. She took in orphan girls, then, in 1855, homeless women, in 1856, the aged and infirm, and then in 1862, she opened a home for orphaned boys. There was never a lack of charitable work to be done.

In 1866, Mother Mallet opened an out-patient center for the needy, and during the seventeen years, she was the director of her community she was responsible for establishing with the diocese of Quebec, five boarding schools for girls which had curriculum similar to local schools but also trained women to be schoolmistresses. Let us not forget that the Sisters of charity also took in newly arrived immigrants who had no place to go and gave aid and shelter to those who lost everything to fires.

On July 1, 1866, Pope Pius IX approved the rule of the order of The Sisters of Charity of Quebec. Mother Mallet and her followers had stayed true the rule of the Sulpicians. However, the Bishop of Quebec imposed a new Rule on the order. This Rule had been derived from the Jesuits. This caused an internal crisis because the sisters wanted to stay true to their original vows even though the difference was hardly noticeable. But it required a pledge of loyalty to the newly designated Rule. Even within the confines of a deeply spiritual environment, politics reared its ugly head.

Mother Mallet, accustomed to 40 years of honoring the Rule of the Sulpician Order, could not give allegiance equally to both Rules. But the new nuns coming in embraced the Jesuit way and, in 1866, Mother Mallet was not re-elected as Mother Superior. She was even left out of all administrative duties. She returned to live the rest of her life as a simple nun.

Mother Marie-Anne Mallet, suffering from cancer, passed away on Easter Sunday, April 9, 1871,  in Quebec City at the age of 66. She was declared Venerable in January of 2014.