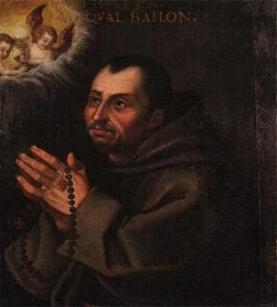 On May 16,1540, a baby boy was born to Martin and Elizabeth Baylon in the Kingdom of Aragon, located in Spain. This day also happened to be the Feast of Pentecost. Since the people in Spain refer to the Feast of Pentecost as the Pasch (Passover) of the Holy Ghost., his parents named their new son, Paschal.

Paschal’s parents were poor tenant farmers and, while only a young boy, Paschal began working in the fields and tending to the sheep. His regimen of work was seemingly never-ending, and he rarely took part in the activities of other kids his age. However, he possessed an obvious spirituality that was noticeable to others, and the other boys would come to him for advice and requests for him to settle their quarrels. Paschal had innate wisdom that was marveled at by all who came to know him.

The boy was unable to go to school, so he carried a notebook with him when he was working. He would ask other kids and even strangers going by to show him different letters and how to use them. He took his tidbits of information to heart and literally taught himself how to read. Soon his favorite books were those about his Lord.

When Paschal was working in the fields, he always fell to his knees when he heard the bells ringing during the Consecration. He was not only rich in piety and virtue, but he was also quite humble. It was just the way he was and people who knew him could not help but notice.

Paschal had always harbored a deep desire to enter religious life. Now and then he even wondered if that might ever happen. He had been offered spots in several richly endowed monasteries, and some prodded him to enter the priesthood. He had said, “, “I was born poor and am resolved to die in poverty and penance.”

His quest for simplicity came to fruition when, in 1564, he was able to enter the Franciscan Monastery of the Friars Minor at Monteforte. It was located in Orito, Spain and those who were there lived a no-frills, austere existence. It was what Paschal had hoped and prayed.for. The young man professed his vows at the monastery on February 2, 1565.

St. Paschal was frequently found before the tabernacle, at times even prostate with his arms outstretched. The humble brother, who had taught himself to read and had no known education possessed a deep knowledge and insight into the mysteries and teachings of the faith. Learned men marveled at him, and most figured he was guided by the Holy Spirit. He was so knowledgeable that during the height of the Calvinist heresies he was chosen to travel to France to defend the Church’s teaching on the Real Presence.

Once God even demonstrated the high esteem he had for Paschal by using the Blessed Sacrament. Paschal was out in the field tending his flock. When he heard the bells ringing, signaling the Consecration was taking place, he immediately knelt down. As he did the Blessed Sacrament appeared before him in the monstrance. Incredibly, it was held aloft by angels hovering above. Others saw this and were in awe. Word spread quickly about the miraculous Brother Paschal and his visions, which became more frequent.

Brother Paschal Baylon passed away on May 17, 1592. The custom of the time was for the deceased to be placed on an open stretcher in the church. This was done, and when the Consecrated Host was elevated at his requiem Mass, Paschal’s body sat up, and bowed to the Sacred Host. It remained like that and repeated the bow as the chalice with the Precious Blood was elevated. Then Paschal’s body lay back down. Witnesses to this miraculous event also testified that his eyes were open watching the priest during the entire Consecration.

Paschal Baylon was beatified by Pope Paul V in 1618, and he was canonized a saint by Pope Alexander VIII on October 16, 1690. He is the patron of all Eucharistic Congresses and Eucharistic Associations. Paintings of St. Paschal usually are shown with him in adoration before the Blessed Sacrament which was the greatest love in his life.