Mama, mama, see what I got from the little boy.” In his hand, he held a small roll of bread. (It was from the baby Jesus) 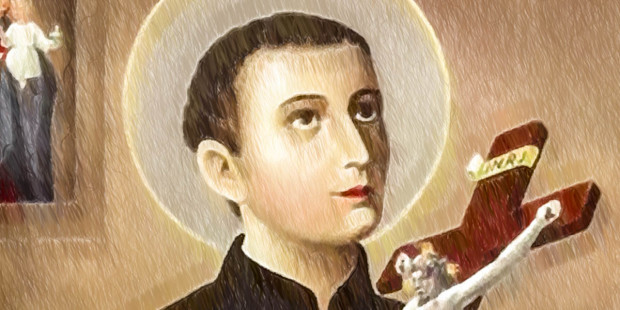 The Annual March for Life took place in Washington. D.C. on Friday, January 24. More than a half-million people marched in defense of the unborn. The President of the United States, Donald Trump, spoke live before the crowd, the first time in history a president has done so. However, many expectant women, unsure of their situation, did not attend.   If you were one of them, you might turn to St. Gerard Majella, the Patron Saint of Unborn Children and Expectant Mothers. Many a miracle has been attributed to this young man’s intercession.

Gerard was the youngest child born to Domenico and Benedetta Majella. They already had three daughters, and Gerard was their only son. The date was April 6, 1726. The Majellas were a hard-working Italian family and, Benedetta brought her children to Mass at the Shrine of Our Lady of Graces as often as she could. Gerard, only three, loved the statue of the “pretty lady with the baby.”

When Gerard got a bit older, he would run off to the shrine by himself. The first time he came home, he yelled out, “Mama, mama, see what I got from the little boy.” In his hand, he held a small roll of bread. No one paid much attention but after several days of coming home with bread, his mom decided to follow him and see what he was up to.

What she saw stunned her because the statue of Our Lady of Graces apparently came to life and the Child she was holding scampered down to play with Gerard. She quickly left and, sure enough, when Gerard came home, he had another small loaf of bread with him. Benedetta kept this to herself.

Gerard’s dad died when the boy was twelve, and the family was left in poverty. Gerard’s father had been a tailor so his mom sent him to her brother so Gerard could learn to sew and be a tailor like his father. However, after a four-year apprenticeship, Gerard was offered the job as a servant for the local Bishop of Lacedonia. Needing the money, he took the position.

The Bishop kept hearing stories about Gerard and his kindness and how he would always stop and visit the poor in the clinic, how he always helped others and would even bring the poor leftovers from the bishop’s table. The young man was gaining a reputation just by being himself.

When the Bishop passed away, Gerard returned to his trade as a tailor. He divided his earnings among his mother, the poor, and in offerings for the souls in purgatory. By the time he was 21 years old, he had established a steady business. His mom was quite worried about her son. He looked thin and frail because he was always fasting and doing penance. She begged him to eat, and he told her, “Mama, God will provide. As for me, I want to be a saint.”

Gerard tried to join the Capuchins, but they thought him to sickly to endure the demands of the order. Finally, after much pleading and nagging, he was accepted as a lay brother into the Congregation of the Most Holy Redeemer aka the Redemptorists.

As a lay brother, he would never be a priest, say Mass or hear confessions. He would live under the same roof and wear the same habit and share the prayers. He also would take the vows of Poverty, Chastity, and Obedience. He would be a caretaker to the monastery. He embraced this role and served them well acting as gardener, sacristan, porter, cook, carpenter and, of course, the tailor.

But there was always the children. They flocked to Gerard to hear his amazing stories and learn how to pray. Once, when a large group was sitting around listening to him, a little boy fell off a cliff. When they reached the child, they thought he was dead. Gerard said to the boy’s father, “It is nothing.”  Then he traced a cross on the boy’s forehead, and he awoke. It was just one of Gerard’s many miracles that were witnessed by people.

Gerard had tuberculosis and died on October 16, 1755. He was 29 years old. Many miracles have been attributed to his intercession. One stands out as the reason he has come to be known as the patron of mothers. A few months before his death, he was visiting a family. He dropped his handkerchief, and one of the girls picked it up to return it to him. He told her to keep it because one day she would need it.

Years later, as a married woman, she was about to give birth, and the doctor was sure the child would not survive. She remembered the handkerchief and asked for it. When she held it to her womb, the pain disappeared and she gave birth to a healthy baby. There was no explanation.

St. Gerard;  please pray for all those pre-born children in danger of losing their lives and for all expectant moms everywhere.