Leave a comment June 14, 2012 Larry Peterson
Would you tell us a little about yourself?
I was born and raised in the Bronx, NY. I spent 15 years working in the building trades as a Metal Lather/Reinforcing Iron Worker and left that business when I came down with MS. My wife, three kids and I moved to Flordia (doctors advice) 30 years ago. I began doing freelance newspaper commentary after graduating college in 1984. My first book (children’s) was published in Jan, 2011. The Priest and The Peaches is my first full length novel and I have begun work on the sequel (no title yet). I live in Pinellas Park, FL. I have graduated to “senior citizen status” and writing has become my “permanent senior moment.”
What are you currently working on?
As mentioned, I am currently working on the sequel to The Priest and The Peaches and I am also knee deep in a three month longonline book tour which has not only been a fun journey but has also taught me things about myself and my characters.  How cool is that?

What was the first book you ever wrote about and was it ever published?
The truth is, Slippery Willie’s Stupid, Ugly Shoes was originally penned long ago. Then it sat. I pulled it out about 22 years ago and rewrote it, shortened it and sent it off to HBJ. Now it gets weird. I received a phone call from their schoolbook division in Orlando, FL and a nice lady said to me, “Congratulations and welcome to the HBJ family.” That was a WOW! moment. Three weeks later I received a standard rejection letter from the San Diego office. Talk about a high and a low. I could go into more detail – but what’s the point? That just was not the right time. Anyway, I pulled the book back out about five years ago, rewrote it again and  changed the title, etc. and now it is out there. It’s all “GOOD.”

What or who made the biggest influence on you wanting to become a writer?
I don’t think anyone did. I just liked doing it. This is one of those questions that have made me think about things as I travel along the blog-tour highway.

Do you have any writing habits that people might find unusual?
Not really. I do write with pen and paper before I go to the keyboard and I am a morning person. That’s it.

I have heard that many authors listen to music while they write. Do you? If so, what do you usually listen to?
I don’t nor could I. That’s like trying to read while you watch TV. My brain is not that nimble. 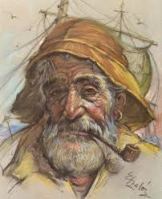 Do you have a favorite character or one that is especially close to your heart?
I guess this means in general and not necessarily from my book – I love Santiago from Hemingway’s Old Man & The Sea. He is old, worn out, alone on the sea,  doing what he has to do, no fan fare, no audience, and is having  the greatest battle of his fishing career. He wins the battle and the sharks strip him of his trophy yet, he has no regrets.

What is the best gift you have ever received and who gave it to you?
Being THANKED by a perfect stranger for writing the book and letting you know how important it was to them.You know it came from their heart. That’s the best.

What are three things (not people) that you wouldn’t want to live without?

My faith, my eyes and an early morning before sunrise.
What is something that you have always wanted to do, but just haven’t gotten around to it yet?
Nothing really. I have not done much in my life but I’m content and at peace with most everything.
All the music in the world is being destroyed and you can only save one album, what would you save and why?
Too much beautiful music to choose from. So, give me Chopin’s Major in E-flat.

What is your all-time favorite book? What is your favorite book you have read this year?
Hemingway’s Old Man & The Sea. This year, Under The Same Sky by Cynthia DeFelice. About a 14-year-old who goes to work with migrant workers on his father’s farm to earn some money and learns some life-changing lessons about being with folks who are “different.”
What do you like to do in your spare time?
Probably read.
Are you an early bird or a night owl?
Early bird for sure.
If you were throwing a dinner party and you could invite five people (fictional or real, dead or alive) who would you invite?
Abraham Lincoln, Charles Dickens, St. Joseph, and my parents (who have been dead a long time).
You are given a ticket that will bring you anywhere that you want to go, at anytime in history. Where would you go and why?
The battlefield at Gettysburg,
Nov. 1863 to listen to Abraham Lincoln deliver the Gettysburg Address.