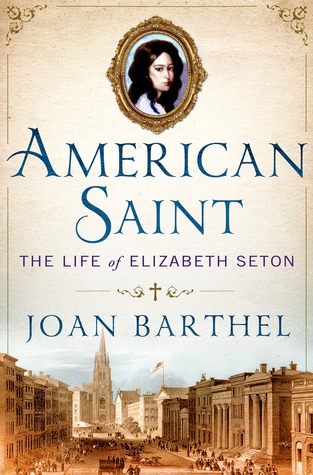 Wow! Reading this book was quite the experience.

At first I was a bit put off by the introduction because it was immediately referencing an out-of-context quote from “Father” Joseph Ratzinger from almost 50 years ago during the Second Vatican Council.  It was how he suggested obeying conscience before ecclesiastical authority.  Then it  jumped to a Pope Benedict XVI (the former Joseph Ratzinger) cracking down on American nuns who were obeying their consciences.  We get to all of 100 words and we are reading about the Vatican accusing the Leadership Conference of Women Religious of “promoting radical feminism”.  Wait a minute–this is supposed to be about St. Elizabeth Ann Seton, not feminism and women’s rights.  My antennae were extended. I took a deep breath and plodded on.

Whew–thank God I did because when you read this book you quickly learn that Elizabeth’s agenda was always God-centered.  Her personal relationship with Him defined her.  He was the source of her strength and courage as she lived her amazing life.  If she succeeded in making women proud it was because she strived to make God proud first. This is very important for all to remember when thinking of this woman.

Joan Barthel manages to take us on a fabulous journey  through the life of Elizabeth Ann Seton, the first American born Catholic saint.  She manages to do this by pouring over more than three thousand pages of Elizabeth Bayley Seton: Collected Writings and filling her narrative with the words of St. Elizabeth herself. There are excerpts from letters to her husband, her children, her siblings, her spiritual advisors and others. The ten-year effort Ms. Barthel has put forth is truly remarkable and the result is worth the time spent reading to the end. This was not a “quick” read for me but the time spent with St. Elizabeth and her words, written in the English language of two hundred years ago, was worth every second.

The meandering journey through this book begins as Elizabeth wakes to the ringing of church bells. She is in a Lazaretto in Leghorn, Italy, having just arrived from America after a seven week journey. The year is 1803. Due to an outbreak of yellow fever Elizabeth, her husband, Will, and their daughter, Anna, had been quarantined and would not get out of the cold, dank room for weeks.  The irony was that Elizabeth had brought Will to Italy to help his tuberculosis, not make it worse.  From this point we skip back in time to New York City in 1767, meet Elizabeth’s parents, Dr. Richard Bayley and his wife Catherine.  We read that Elizabeth Ann Bayley was born on Aug 28, 1774.  The family connections become very pronounced and complex as we move forward but suffice it to say it was a large, extended family and I had a bit of a time keeping track of all the members in it.  Onward to the life of this amazing woman.

Elizabeth  felt a closeness to God from when she was a child although she did not understand it.  At the age of 19 she married William Seton, a successful importer.  Socially prominent, she was a member of Trinity Episcopal Church and came under the influence of Reverend Henry Hobart, a no-nonsense Calvinist who despised Catholicism.  Hobart had a profound effect on Elizabeth and when she announced to him her decision to become a Catholic he was horrified.  He told her that she was jeopardizing her very chance of salvation.   “When I see a person whose sincere and ardent piety I have always thought worthy of imitation in danger of connecting with a communion which my sober judgment tells me is a corrupt and sinful communion, I cannot be otherwise than deeply affected.”  (Nowadays someone would simply say, “I’m very disappointed in you.”)

Elizabeth waivered. She was at a crossroads. Hobart was her mentor, spiritual director and a dear friend. She trusted him enough that she had asked him to take her sons if something ever happened to her. Protestant Episcopal or Catholicism, what should she do?  I leave it to you, the reader, to filter through the turmoil and doubt that filled Elizabeth Seton as she pondered her conversion.  It is a magnificent journey that took a little over three years from when she first entered a Catholic Church in Italy to when she received her First Holy Communion.  Her conversion brought her rejection by her family and friends and left her in a state of  poverty.  But her new found faith  filled her with a steely resolve.  Her love for Christ in the Eucharist and being able to attend Mass every day, receiving Him within her very self,  filled her with  a love of God that few people ever attain.

Elizabeth Ann Bayley Seton died at the age of 46.  She had been a Protestant and a convert to Catholicism. She had been rich, she had been poor, she was among the socially prominent, she was an outcast, a wife, a mother (who worked and saw three of her five children die).  She was a widow, a teacher, a social worker, a nurse, the founder of the first active order of women religious in the United States known as the Sisters of Charity, and she started the first free Catholic school in America.  Quite a journey for a girl that danced at George Washington’s 65th birthday party and ultimately was canonized in Rome by Pope Paul VI as the first American-born saint.

From the pen of St. Elizabeth Seton written on a fragment of paper; “Eternity—in what light shall we view it? What shall we think of the trials and cares, pains and sorrows we once had upon earth?  Oh! When a mere nothing!  Let then they who weep be as though they wept not; thought who obtain as though they possess not.  The world passes away.  ETERNITY!  That voice to be everywhere understood.  ETERNITY!”  (I had to read this a few times before the beauty of it impacted me)

St. Elizabeth Seton; a mother, a wife, a Catholic saint and an American woman who should be honored and respected by all. Do yourself a favor–Get this book, take your time and let her words draw you in.
Nicely done. Joan Barthel, nicely done.

One thought on “Book Review: AMERICAN SAINT; The Life of Elizabeth Seton by Joan Barthel”