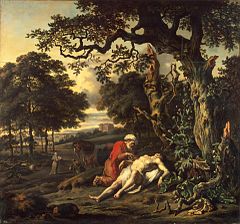 One of the most famous Gospel readings is from Luke, Ch 10: 29-37; we all know it as the Parable of the Good Samaritan. When Jesus is asked which of the three was a neighbor to the robber’s victim, Jesus said, “The one who treated him with mercy. Go and do likewise.”  What follows is about someone who may be one of the greatest of  Good Samaritans of all time, a man we know almost nothing about.

Servant of God and Stigmatist; Anna Louise Lateau, passed away at the age of thirty-three. What is extremely interesting is the fact that Anna Louise would never have lived into her fourth month of life if it wasn’t for a stranger whose name was Francis Delalieu.

The Lateau family was literally near death. The father, Gregory,  had died from smallpox just three months after Louise had been born. Adele, with three little children, was still bedridden after having a very rough time giving birth to Louise. Louise, still an infant, had also contracted smallpox. The oldest child, Rosina, was trying to be the in-house caregiver which included taking care of two-year-old Adelina.

The local doctor, overwhelmed with this smallpox epidemic, had stopped by about a week after Gregory’s death to check on the family. He did his best to show three-year-old Rosina what to do. He knew it was hopeless and was sure he would soon come by and find them all dead. He told his friend, Francis Delalieu, about the family.

Try to imagine how this newly widowed, mother of three babies with no money was feeling. The despair and hopelessness must have been unbearable as she watched her three children quietly dying before her eyes. Weakened to a point where she was unable to get out of her bed, she was probably just praying that she would not be the first to die, leaving them alone. And suddenly the front door opened and there was Francis Delalieu. God was listening after all.

I have been (as have many others) a primary caregiver to someone seriously ill. Some caregivers are helping to nurse their loved one back to health after a serious surgery or accident. The upside to this type of caregiving is that an end is in sight because a reachable goal is possible ie; recovering from open heart surgery.

Then there is the alternative of caring for someone who is terminally ill. The goal in these cases is to help your loved one live as peacefully and as comfortable as possible until God calls them home. And then you have a person like Francis Delalieu. The only possible motivation he might have had to step into this situation was that of a Good Samaritan. He simply LOVED his neighbor.

Who was this man? Who was this stranger who came into a household that was a breeding ground for smallpox and had three babies with a bedridden mom living there who were near death? Who does this kind of thing simply out of kindness and compassion? Who would stay for almost two and a half years until the mother and children were once again healthy? Francis Delalieu is that person. There are many like him but most are unheralded and unheard of.

All we can seem to find out about Francis Delalieu is that he was a farmhand or a laborer and that he lived in or around the small town of Bois d’ Haine, in Belgium. That is about it. It is known he took  Adele Lateau and her children under his care and nurtured them all until they were well. After that period of time Francis seems to have vanished. At least there is no record of him after that point in time which would be around 1853.

Anna Louise Lateau was gifted with the Stigmata in the year 1868. For the rest of her life, her nourishment was only the Holy Eucharist and a few glasses of water per day. She became one of the most famous stigmatists of the 19th century. Francis Delalieu was just an unknown man who stepped up and took care of his neighbor, just like the Good Samaritan in Jesus parable. I am sure his reward has been great in heaven. When God is involved, all things are possible.