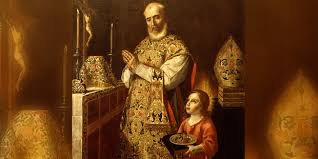 Peter Paschal with a young Jesus as Altar Boy
aleteia.org

Peter Paschal, was born in Valencia on Spain’s east coast, in the year 1227. Peter’s parents were devout Mozarabs (Iberian Christians) who managed to live under Muslim rule. They did this by paying a yearly tax, known as a jizyah. This tax was even collected as a means of sparing the life of certain non-Muslims living in the community depending upon whether or not the ruling Imam decided a certain person deserved death. The Mozarabs and the Muslim Arabs co-existed and even spoke a similar language known as Mozarabic.

The founder of the Mercedarians, St. Peter Nolasco,  was very good friends with Peter’s family and he and his Mercedarian companions would oftentimes stay at Peter’s home when they were on a mission to free Christian captives. This exposure to these pious men helped to instill in young Peter a deep sense of piety. Combined with the virtuous, charitable and caring influence of his parents, Peter Paschal, grew into a deeply devoted servant of God.

Ironically, the primary influence in Peter’s educational journey was a teacher that Peter’s parents had ransomed from the Muslim Moors years before. The young man traveled with him to Paris and, under his guidance, studied, preached and taught, developing a fine reputation as a learned and pious man.

Peter then returned to Valencia and Peter Nolasco became his spiritual advisor. After another year of preparation, he became a full member of The Order of the Blessed Virgin Mary of Mercy, aka Mercedarians. It was time for him to begin redeeming captive Christians.

Peter Paschal had a brilliant mind and James I, the King of Aragon, appointed him as a preceptor (teacher) of his son, Sanchez. Sanchez was so influenced by Peter that he himself became a Mercedarian priest and, in 1262, was made the Archbishop of Toledo. Since Prince Sanchez was too young to be consecrated, his teacher, Peter Paschal, was appointed to govern the diocese and was consecrated as the Bishop of Granada, which was under the control of the Muslims.

As Bishop of Grenada, Peter Paschal, preached tirelessly about Christianity. He became known for his intense determination and zeal in redeeming captive, Christian slaves who had been imprisoned by the Moors. His preaching was so potent that many Muslims began to embrace the doctrines of Jesus Christ and convert to Christianity. The followers of Mahomet (commonly referred to as Mohammad) began to harbor an intense and growing anger toward Peter.

Besides preaching, Peter not only continually ransomed captive Christians from the Moors, he also comforted those imprisoned and preached the gospel to the infidels. His ability to reconcile apostates and others and bring them to the church was the reason he was finally arrested and placed in a dark dungeon. Orders were given that no one was allowed to speak to Peter Paschal.

Peter was held in prison and constantly treated cruelly and with disdain. But, strange as it may seem, he was given permission to offer the Holy Sacrifice of the Mass every day. And this is where the wonderful legend of St. Peter Paschal springs to life.

One morning, while preparing for Mass, Peter realized he had no altar server. He usually was able to have one of the prisoners he had converted serve for him. But this day he could find no one to serve. Suddenly, a little boy about the age of five appeared before the priest. The boy was dressed in the clothes of a slave and asked Peter what he was looking for. Peter told him he needed an altar server.

The boy told Bishop Peter he would gladly serve Mass for him if he would let him. Peter asked him who he was and the boy said, “I will tell you who I am when you have finished Mass.”

After Mass was finished, Peter asked the boy a few questions and was amazed at the wisdom coming forth from the child. Then he asked the boy, “Tell me, who is Jesus Christ?”

The boy answered: “I am Jesus Christ; it is I Who was crucified for your salvation and for that of the whole world; look at My hands, and My feet, and My side, and you will recognize the wounds I received during My passion. Because you have of your own choice remained a prisoner in order to procure freedom for my captive children, and because, to obtain their freedom, you spent money sent to procure your own, you have made Me your prisoner.”

As mysteriously as He had appeared, the little boy disappeared. Peter Paschal was filled with an indescribable joy he could never have imagined. Jesus, as a little boy, had been the Bishop’s altar server.

The Muslims sensed and actually revered the sanctity of their prisoner. They told him if he would never say anything against Mohammad they would give him his freedom. He said he could never make such a promise. Shortly thereafter, as Bishop Peter Paschal was saying his Thanksgiving after Mass, a Muslim executioner came up from behind him and cut off his head.   The date was January 6, 1300.

Bishop Peter Paschal was beatified and canonized by Pope Clement X on August 14, 1670.

St. Peter Paschal–please pray for us.