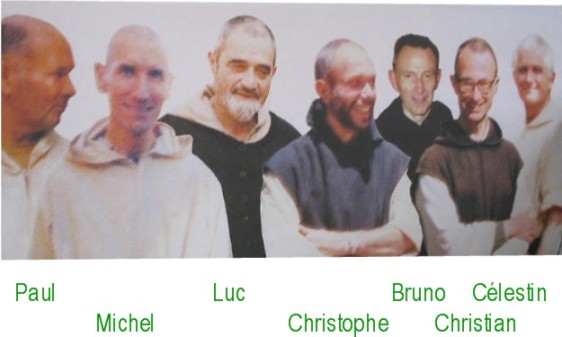 Murdered “in odium fidei”–“in hatred of the faith”

The   bloody Algerian Civil War erupted in 1993 and among the victims of this persecution were 19 monks and nuns. They were assassinated between 1994 and 1996. The “positio” (the report documenting all information about the cause for beatification) has been completed, and the elevation of these courageous, selfless, Catholics into the ranks the Beatified, could happen by the end of January, 2018.

Among the 19 murdered was a group of seven, known as the Monks of Tibhirine. These men were members of the Cistercian Order  (aka Trappists). On March 27, 1996, these holy men were kidnapped from their home at Tibhirine, taken away and executed. They died “in odium fidei” (in hatred of the faith) as did the other twelve martyrs. What follows is a short peek into the life of one of these people. His name was Christian de Cherge, and he was the priest representing the others in the fruitless negotiations with the terrorists.

Christian was born in Colmar, France, on January 17, 1937. Christian’s dad was a military man, and the boy spent part of his youth in French Algeria where his dad was the commander of the 67th Artillery Regiment of Africa. Upon the families return to France, they settled in Paris.

Christian was enrolled in a school run by the Society of Mary, better known as the Marists (these men were my teachers when I was in high school and, trust me, they were “all business”). Christian de Cherge did have a secret; by the time he was eight-years-old, he knew he was called to the religious life. He said nothing, but as time passed by, he would be undeterred from that calling.

One event had a profound impact on the life of Christian de Cherge. In 1959, during the Algerian War, a Muslim by the name of Mohamed, selflessly saved Christian’s life during an attack. Christian did not know how to thank the man so he told him he would pray for him. Mohammad responded telling Christian “not to bother because Christians do not know how to pray.”

The next day Mohammed was found brutally murdered. Christian never forgot how this Muslim man, knowing the consequences of saving a Christian, did so anyway. Later in his life Christian said, “: “In the blood of this friend, I knew that my calling to follow Christ meant to live, sooner or later, in the country where it was given to me the greatest gift of love.”

Christian de Cherge went on to study the Arab language and Arab culture at the Pontifical Institute of Arab and Islamic Studies in Rome. He finished studying there in  1974 and in 1984 became the Prior of the Abbey at Tibhirine.

Approximately 1 a.m on March 26, 1996, masked terrorists belonging to the AIG (Armed Islamic Group) surrounded the monastery at Tibhirine. Father Christian, knowing that his life and those of his compatriots were now perched on a tenuous rim, walked stoically out to the blood-thirsty, Jesus haters. He stood in front of the armed and masked gunmen and said, “This is a house of peace. No one has ever come in here carrying weapons. If  you want to come in and talk to us, you must leave your weapons here.”

It was a very brave move, but the frightened priest did his best to look calm and collected. The invaders demanded that the monastery support the rebels with money; that the Trappist doctor goes and tend to their wounded men; and that the monks should give them all the medicine they had.

Father Christian agreed to supply all that he could. Then he reminded the  terrorists that it was Christmas Eve and a very important Holy Day for Christians. Amazingly, the leader of the terrorist group, Emir Syat-Attya, apologized. They agreed to leave but said they would be back.

On March 27, the AIG returned and took the seven monks hostage. They were all beheaded on May 22, 1996. Father Christian left these parting words in letter form:

“If I were one day to become a victim of terrorism, I would like my community, my church, and my family to remember that my life was given to God and Algeria.”

This following link will connect to the 19Martys of Algeria . Each and every one of them was a true “lover” of Jesus Christ, so much so that they emptied their blood for Him.

We ask them all to pray for us so that we too, may have the courage to stand tall for our faith.