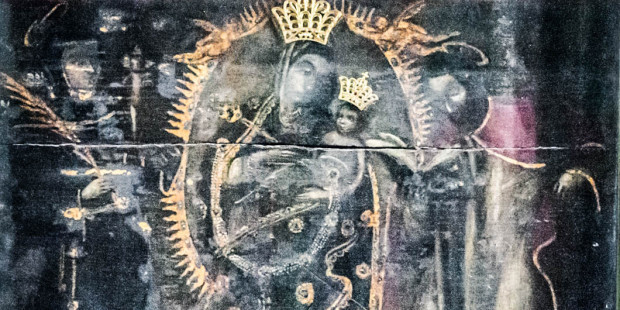 Last September, Pope Francis visited Columbia, South America. Before leaving on his trip, he asked that the miraculous painting of the Patroness of Columbia, Our Lady of the Rosary of Chiquinquira, accompany him on his journey. The Pope planned to spend time in front of the painting which had received a Canonical Coronation from Pope St. Pius X on January 9, 1910. The story behind this magnificent painting is quite remarkable.

If you are an artist in the 21st century and you need paints for your creations, you might go to a craft store to purchase them. More than likely, most every pigment and painting tool needed to do your work will be available. However, in the 16th century, acquiring artist’s supplies was not so convenient.

Alonso de Narvaez was a Spanish painter who plied his craft during those days. He had been asked to create an image of the Blessed Virgin by Don Antonio de Santana for an oratory he had built. Alonso immediately got to work.

There were no craft stores in those days, so he painted in pigments he created himself using the soil, herbs, and flowers in the region (modern Columbia) in which he was working. His canvas was more than likely a woven cloth made by the local Indians.

Alonso began applying his self-created pigments to the woven cloth “canvas.” The cloth canvas was about forty-four inches wide by about forty-nine inches in length. The image of Our Lady is about one meter (39.37 inches) high, and she is standing on a half moon.

Our Lady has a sweet smile on her face and is holding the Christ Child in her left arm. Jesus has a small bird tied to His right thumb. A Rosary hangs from Our Lady’s hand. Since there was extra space on the cloth canvas, Alonso painted St. Anthony of Padua and St. Andrew the Apostle on either side of her.

Using this archaic equipment and combining it with incredible creativity and resourcefulness, Narvaez created one of the most magnificent Marian paintings of all time, Our Lady of the Rosary of Chiquinquira.

Unfortunately, the paints and cloth canvas were unprotected in the poorly built oratory. The painting became worn and faded and was removed and taken to Chiquinquira and used as a bed to dry wheat in the sun. It remained there for seven years. That is when Dona Maria Ramos arrived from Spain and was heartbroken to find the chapel being used for animals and the painting in such a horrid condition.

Day after day she prayed for the rebirth of the chapel.  On  December 26, 1586, at 9:00 o’clock in the morning, the canvas began to brighten as the sun’s rays shined upon it. Suddenly it was brightened by the image of the Holy Virgin, and then the entire image was restored. The image actually healed as holes and tears in the cloth seemed to seal themselves.

Maria was astonished, and soon the miracle was drawing crowds of people. Miraculous cures followed, and church officials ordered an investigation into the validity of such claims. Many were validated.

In 1630 the Archbishop of Bogota authorized the Dominican Brotherhood to take charge of the chapel, and it was replaced by a regular church. In 1801, the present Basilica was built replacing the smaller church, and the Holy See granted a liturgical feast day that is celebrated also in Ecuador and Venezuela.

Pope Pius VII, declared Our Lady of Chiquinquira, Patroness of Columbia in 1829. In 1910 Pope St. Pius X granted the image a Canonical Coronation.  Pope  Benedict XV carried out that decree in 1919 because it had been put on hold due to the political climate in the country. Finally, Pope Pius XI elevated her sanctuary to a minor Basilica in 1927..

The actual feast day of Our Lady of the Rosary of Chiquinquira is July 9, the actual day of coronation.

Our Lady of the Rosary of Chiquinquira, please pray for us all.