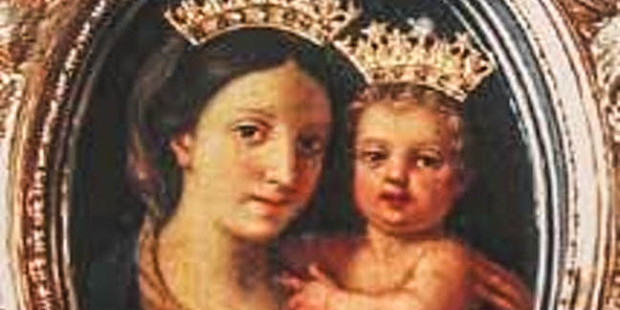 The Basilica di Santa Maria Maggiore is the largest Catholic Marian church in Rome. It is better known as the Basilica of St. Mary Major. St. Mary Major is part of the Papal Archbasilica of St. John Lateran which is the Cathedral Church of the Diocese of Rome. That simply means that the Chair of Peter, from which the Pope speaks ecclesiastically on matters of Faith & Morals (aka ex-cathedra), is located here. As the oldest and most important basilica in the western world, it bears the title, Ecumenical Mother Church of the Catholic Faithful.

Within the Basilica of St. Mary Major is a copy of a painting. It is a painting of the Blessed Mother holding the child, Jesus,in her arms. The child is seen pointing to His mother. The original picture was painted by the renowned Italian artist, Carlo Maratta (1625-1713).

History tells us that Carlo Maratta, who became the court painter for King Louis XIV of France, gave the painting to a young nun by the name of Sister Clara Isabel Fornari (there are those that say that Sister Carla painted the picture herself but most accounts reject that idea).

Sister Clara belonged to the Poor Clares of St. Francis and in due time became the Abbess of the convent located in Todi, Italy.

Sister Clara, who embraced a strict life of penance, was blessed with many mystical graces. As time passed, she received the Sacred Stigmata of Our Lord’s Passion. She had a profound devotion to Our Lady and became deeply attached to the image of Our Lady with the Divine Infant.

The original copy of the painting remains in the chapel in Todi, Italy; a copy hangs in the Basilica of St. Mary Major in Rome. (All copies offer the same spiritual powers as the original). The seminary there has always held the picture in great esteem. The students, having recourse to the miraculous image in their most pressing needs, always had their prayers answered by Our Lady. The seminarians began calling the painting, “Our Lady of Confidence.”  It is also became known as “Mater mea Fiducia mea!” (My Mother, my Confidence).

Noteworthy was the complete protection granted by Our Lady of Confidence to the seminarians against the scourge of Asiatic Cholera that claimed thousands of lives throughout Italy in 1837.

During the First World War, the Blessed Virgin watched over the more than 100 seminarians who had turned to her with redoubled confidence. Many seminarians were sent to the war, and there are numerous letters written from the battlefield recounting the marvels worked by the Madonna for those who had sought her intercession. The seminarians developed such a devotion to the painting that they requested it be granted a Canonical Coronation.

Pope Gregory XVI did grant a Canonical Coronation to the image on 14 October 1838, at the requested petition of the seminarians. Also, Pope Pius X, was particularly devoted to Mary under this title. In addition, Pope St. John XXIII, was a great devotee of Our Lady of Confidence. He visited the holy image frequently. He loved this devotion so much he offered his very first Mass in its presence.

What follows is a translation taken from a parchment which had the words of the Blessed Mother as written down by Sister Clara:

“The Divine Lady deigned to reveal to me that every soul that confidently presents herself before this picture will obtain from her Divine Son the general pardon for all their sins. Moreover, my Divine Lady assured me with the love of a true mother that she would grant a special tenderness and devotion toward everyone who contemplated this picture.”

When presenting oneself before the painting the ejaculatory prayer should be, “My Mother, My Confidence.”

Our Lady of Confidence, please pray for us all.