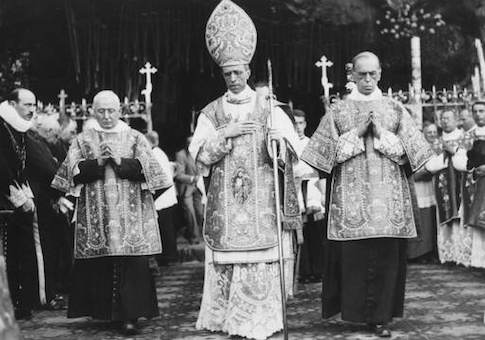 The origins of wearing vestments at liturgical ceremonies date back to the Old Testament. The Old Testament practice of wearing special garb for religious events did influence the church. However, Christian vestments were not adaptions of the Old testament clothing but were more or less copied from the dress of the  Roman-Graeco world.

History tells us that in the early Christian church, priests and other clergy wore the same type of clothing as everyone else. When celebrating Mass or conducting other liturgical ceremonies, they were required to make sure their clothes were pure and clean.

If you were an altar server or sacristan it would be your job to lay out the vestments the priest would be wearing for that day’s Mass. You would have to know what they were and how to present them. This is the order for the vesting process. It follows the rubrics (rules) of the Church:

The Amice is used to cover the collar of streetwear. Today it is mostly used by priests celebrating the Latin Rite (Tridentine Mass). There are those priests who do wear it when celebrating the Novus Ordo Mass. The Alb can be used to cover the collar instead of wearing the Amice. Originally used as ahead covering the Biblical reference is from Ephesians 6:17: “And take the helmet of salvation and the sword of the Spirit which is God.”

The Alb is the long white garment that covers the priest from the neck down to his feet. It is white to symbolize freedom from sin and purity in life.  From the Book of Revelation 7:14: we have; “ “These are the ones who have survived the great period of trial; they have washed their robes and made them white in the blood of the Lamb.”

The Cincture is the long cord with tassels on the end that the priest ties around his waist to hold the alb in place. Unlike the Stole this can be white or the color of the vestments. This reminds the priest of the quote from 1 Peter 1:13: “Therefore gird up the loins of your mind, live soberly and set your hopes completely on the grace to be brought to you at the revelation of Jesus Christ.”

The next item you layout is the Stole which is laid on the Chasuble.  This is the long cloth that drapes around the neck and hangs down beyond the waist. This may be crisscrossed across the chest which symbolizes the Cross. The Stole is the same color as the Chasuble. It reminds the priest to preach the word of God with courage and conviction. Biblical reference is in Hebrew 4:12: “Indeed, the word of God is living and effective, sharper than any two-edged sword, penetrating between even soul and spirit, joint and marrow, and able to discern reflections and thoughts of the heart.”

The Chasuble. This is the outermost garment that only a priest or bishop may wear. It is only worn when Mass is being offered. It covers and embraces all underneath it.  Biblical reference is in Colossians, 3:14: “And over all these put on love, that is, the bond of perfection.”

There is one more and it is called the Maniple. This is similar to a large handkerchief that hangs over the left forearm. It is the same color as the other vestments. It stopped being used after 1969. However, it is still required use for those priests who offer the Latin Mass (Tridentine  Mass).

There are many more vestments used in liturgical services such as Benediction, Adoration, and processions. Several common ones are the Cope, the Humeral Veil, the Surplus, and the Dalmatic which is worn by Deacons. These may be presented at another time.