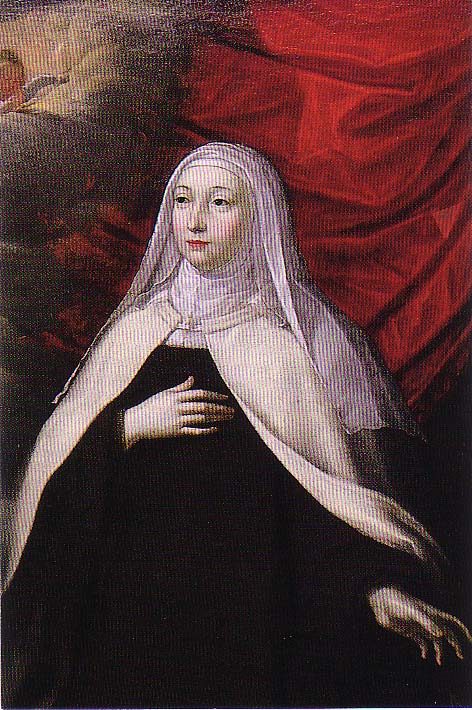 Marie Guyart was born on October 28, 1599, in Tours, France. By the time Marie was fourteen, she had already asked her parents if she could enter the convent. In her book, The Jesuit Relation, written in 1654, she wrote that she had experienced a visit from Jesus when she was seven years old. She wrote that Jesus had come to her, reached out, put His arms around her, and hugging her said, “Do you wish to belong to Me?”

She says she told Him loudly, “YES!” Marie also wrote in her book, that from that point forward she could only think of “Goodness.”

Although Marie constantly spoke of becoming a religious, her parents betrothed her to a man named Claude Martin. When she was eighteen, Marie did as her folks wanted and married him. The couple had a son but Claude died when the boy was only six months of age. Marie was twenty. The year was 1919 and Marie was suddenly a young widow with a baby to raise.

She then moved in with her sister and her husband, Paul Buisson. Paul owned a thriving transportation business, and Marie began working for him. She possessed great organizational skills and soon took over management of the Buisson business. However, over the ensuing ten years, her primary focus and desire were always to enter the spiritual life.

Marie’s intense desire to become a religious was always present.  When Claude Jr. became a teenager, she began making plans to enter the Ursuline order. Marie’s sister was willing to raise the young man as her own. Marie was heartbroken to leave young Claude, but she believed that he would be better off with a father figure in his life. Paul treated the boy as his own son, and her sister loved him dearly. Those factors sealed her decision to become a nun.

Marie joined the Ursuline order in 1632. She received the name of Mother Marie of the Incarnation. It was sometime during 1636 that Mother Marie had a vision of a beautiful place filled with mountains and forests and beautiful lakes.  She was told that this place was  Canada, and she was supposed to go there and build a house for Jesus. It took her several years, but she managed to raise the necessary funds.

Mother Marie garnered the support of the Jesuits.  She was given the charter to establish centers in New France (Canada) by none other than Louis XII.  On April 3, 1639, she and two other Ursulines, set sail for land she had never seen but only dreamed of.

They arrived in Quebec on August 1, 1639. Mother Marie and her companions immediately set about doing missionary work by attending to the many Indian people in the area. Soon several more Ursuline nuns joined them, and the nuns moved into a small house donated to them for use as a convent. By 1642 the nuns had managed to have a permanent stone building built.  It became the first school in Canada and was known as the Ursuline Monastery of Quebec.  (Today the building is one of  the National Historic Sites of Canada).

Mother Marie’s unique management skills enabled her to organize the new school and convent into a functional and efficient operation. There were Iroquois, Algonquin, Montagnais, and Ouendat natives in the area and Mother Marie worked with the Jesuits and learned their languages even writing dictionaries in all the languages. Slowly but surely women began joining the order.

Ten years after Marie had entered the Ursuline order, her son, Claude,  became a Benedictine monk. Mother and son kept in frequent contact, and when Marie left for Canada, they kept up a regular correspondence with each other and this continued for more than thirty years. Mother Marie of the Incarnation passed away on April 30, 1672.

She had spent 33 years in the Canadain wilderness. Claude wrote a biography of his mom. In it he wrote, “Her zeal for the salvation of souls, and especially for the conversion of the Indians, was great and so universal that she seemed to carry them all in her heart. We cannot doubt that, by her prayers, she greatly called down God’s many blessings upon this new-born Church.”

Mother Marie of the Incarnation is recognized as one of the primary reasons Catholicism grew and flourished in Canada. There is even a statue in her honor standing in front of the Quebec parliament.

Saint Marie of the Incarnation was canonized by Pope Francis on April 2, 2014. We ask her to please pray for us all.