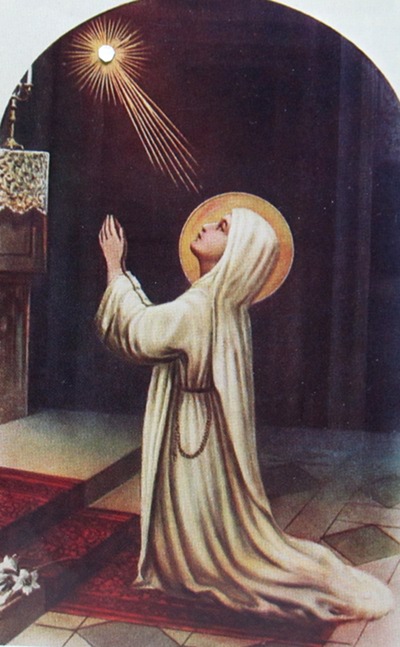 Some children exhibit a  spirituality that is so powerful that they become an actual phenomenon. However, unlike child prodigies, it is not their mental capabilities that transcend the norm. Rather, it is a  connection with God Himself that takes them to a place reserved only for them. Imelda Lambertini was one of those chosen as God’s messenger. And she began doing God’s work when she was only five years old.

Imelda was born in Bologna in the year 1322 and was an only child. Her father, Count Egano Lambertini and his wife, Castora, were devout Catholics. Count Egano was well respected and was known for his ongoing charity, especially to the poor and downtrodden in the city of Bologna. When Imelda was baptized, she was given the name, Magdalen.

Magdalen grew and was inspired by both of her parents who told her stories about Jesus and Mary and of the saints. They instructed her in the faith, and her mother had a particular devotion to the souls in Purgatory. Magdalen prepared a place for herself in her room where she could pray. She wanted to think about the Child Jesus as much as she could.

On her fifth birthday, she asked if she could receive Holy Communion. At that time a child could not receive until they attained the age of 14. Magdalen, accepting the emptiness she felt,  would have to wait.

When Magdalen was nine years old, she already had a deep desire to live in a convent. Her love for Jesus was unmatched and all she could think about was that the best thing a person could do was to save their own soul. She desperately wanted to live in a place of prayer where she could just focus on loving Jesus. She began pleading with her parents to let her join a convent.

Interestingly, in those days, it was not uncommon for parents to allow their children who professed a desire to become a religious person, to allow them to move into a place of prayer and worship. Magdalen was granted her wish by her parents and moved into the convent of St. Mary Magdalen, outside Bologna.

Young Magdalen seemed much too young to wear the Dominican habit but she pleaded with the sisters so passionately they gave in. She was filled with joy when they gave her the habit and began calling her Sister Imelda.

Nine-year-old Sister Imelda began to immediately devote herself to prayer and penance. Even though a child she worked so hard at obeying the order’s rules and doing the right thing.  She became a role model for many of the sisters that lived with her. Sister Imelda found a corner in the rear of the convent garden and built a small replica of Calvary there. She would go there and meditate on the sufferings of-of Jesus. The one thing that Sister Imelda longed for more than anything was to be united with Jesus through Holy Communion. She even asked the other sisters,  “how is it possible to receive Jesus into one’s heart and not to die?”

God’s plan for Sister Imelda Magdalen came to fruition on May 12, 1333. The little nun was eleven years old. She knelt alone in the corner of the choir watching as the other sisters received Holy Communion. She wanted to receive Communion so desperately that she was praying and weeping. She remained where she was as Mass ended and watched as the nuns and priest left the chapel.

The nuns who were on their way out suddenly smelled a beautiful fragrance. Following the aroma, they headed back to the chapel and, to their amazement, saw a brightly lit Host hovering above Imelda’s head. The nuns hurried to get the priest.

Still vested,  Father returned and saw the miraculous sight. He held the paten and knelt in adoration before the vision. As he knelt the Host slowly descended onto the paten. Father knew what to do. He gave the Host to Sister Imelda who, at that moment, received her First Holy Communion. Incredibly, the love and joy that was felt by the young nun was too much for her. Upon receiving Communion, she closed her eyes and died, filled with her Savior and His love.

Sister Imelda Magdalen was beatified by Pope Leo XII in 1826. She has been declared the patroness of First Communicants.

Blessed Imelda, please pray for us all.