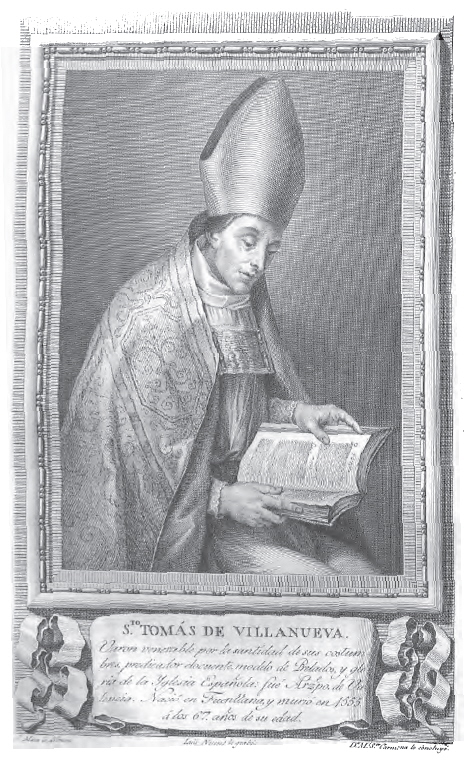 Tomas Garcia y Martinez (Thomas Garcia) was born in 1488, and he might be a prime example of how a father and mother can influence their son. They not only taught him the Faith, but they also showed him how to be charitable. His dad, Alphonsus, was a miller and along with his wife, Lucia, distributed food and supplies to the poor on a regular basis.

Having spent his formative years watching and helping his parents help others, this trait became ingrained in Thomas. He would grow up and spend his life doing the same thing. In spite of his family’s wealth, Thomas often was dressed in a minimal amount of clothing. That was because he kept giving his own clothes to the poor.

Thomas was not only a devout and generous young man, he was also intellectually gifted. By the age of 16, he was able to enter the prestigious University of Alcala located close to Madrid. He became a teacher of arts, logic, and philosophy and within ten years he had become a full Professor of Philosophy. However, after his father died, Thomas decided to leave academia and accept his calling to a religious life.

Thomas took his inheritance and gave it to the poor. In 1516, he moved on to Salamanca and joined the Augustinian friars taking the vows of chastity, poverty, and obedience. Two years later he was ordained to the priesthood.  He then began teaching theology to his peers and quickly gained a reputation as an eloquent and compelling preacher. The Holy Roman Emperor, Charles V, heard Thomas preach and blurted out, “This monsignor’s words can even move stones.”  Thomas was appointed as one of the councilors of states and a court preacher.

He condemned his fellow priests and bishops for their loose morals and secularized ways. He had a great devotion to the Blessed Mother and did his best to promote devotion to her and the Holy Rosary. During these years he served as a Prior of a monastery, a Visitor General representing the Superior General, and became one of the first Augustinian friars to arrive in Mexico in the New World.  He was offered the post of Archbishop of Granada but adamantly refused. However, in the year 1544, he was ordered by his superior to accept the appointment as Archbishop of Valencia in Spain. Reluctantly, he did as he was told.

The appointment of Friar Thomas as the archbishop did not affect his humble presence in any way. He arrived for his installation as the archbishop wearing the same shoddy monastic habit he had worn for years. He even dis his own sewing and mending to keep it wearable. He was given a donation to refurbish his residence but gave it to a hospital in need of equipment and repairs. Immediately after his installation, he began visiting local prisons ordering changes to be made to alleviate the inhumane conditions.

Archbishop Villanova became known as the “Father of the Poor.” He never ceased in his charitable efforts helping orphans, poor women who had no dowry, and the sick. He tried to come up with solutions to help the poor like giving them work. He would say, “Charity is not just giving, it is removing the need of those who receive charity, liberating them when possible.”

Scores of needy people would come every day to his door for help. All would receive a meal, a cup of wine, and a coin. While continuing his life of monastic austerity, he managed to improve the spiritual lives and the living conditions of his faithful servants. While doing these things he also continually worked to promote education, of restore religious orthodoxy, and reform the lifestyles of clergy and laity.

Thomas of Villanova, Archbishop of Valencia, died from heart disease on September 8, 1555, the birthday of the Blessed Virgin Mary. Pope Alexander VII canonized him on November 1, 1658.

His legacy includes being the namesake of Villanova University near Philadelphia, St. Thomas University in Miami Gardens, Florida, and Villanova College in Brisbane, Australia.

St. Thomas of Villanova, please pray for us.