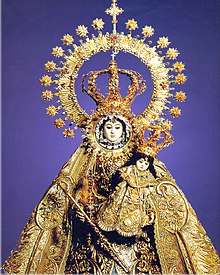 Catholics in the Philippines are profoundly devoted to the Blessed Virgin Mary. In fact, honoring her is at the very essence of their faith.  Every year, on the second Sunday of October, a grand celebration is held to honor Our Lady of the Most Holy Rosary of La Naval de Manila. The first celebration of this feast occurred 373 years ago, on October 8, 1646.  So, how did this annual, time-honored celebration come about? Well, it started with a statue.

In 1593,  Don Luis Perez Dasmarinas was appointed the Spanish governor in the Philippines. Soon after his appointment, his father passed away, and he asked his trusted assistant, Captain Hernando Coronel, to have a sculpture made in his honor. Captain Coronel commissioned an immigrant Chinese artist to do the job. The man was also a convert to Christianity and had a sincere love for the Blessed Virgin.

The sculptor (name unknown) carved the statue out of hardwood. It was four feet and eight inches tall. He crafted the face and hands of the Blessed Virgin and the entire Child Jesus from solid ivory. The features of Our Lady’s face and the Child Jesus’s face are decidedly Asian due to the sculptor’s ethnicity. No matter, Governor Dasmarinas loved the statue and dedicated it to his late father. The statue was called Our Lady of the Most Holy Rosary. Not long after, it was given to the Dominicans, and it was placed in the Church at Santo Domingo.

Some years later, the Dutch Republic wanted to establish a quicker trade route to Asia. The most direct route would be through the Philippines. As is the way of things, they decided that they needed to conquer the country. This would require forming a formidable naval fleet which they did. The Dutch began their attacks in 1646.

The Philippine forces had two galleons to go against the enormous Dutch fleet. They prayed before the statue of the Blessed Virgin and requested she intercede for them in their impending battle. Having placed themselves under the protection of Our Lady of the Rosary they began to pray the rosary over and over. They promised that if they were victorious they would march barefoot towards her shrine in Santo Domingo Church in Manila.

Five major naval battles ensued, and the tiny Philippine naval force, a combination of Spanish and Philippino sailors,  turned the Dutch forces back each time. Only fifteen members of the Spanish navy were lost. When the Dutch finally surrendered, the remaining Philippine and Spanish sailors, fulfilling the vow they had made, walked barefoot in gratitude to the Shrine of Our Lady in Manila. The Blessed Mother was given the name of La Naval and from then on was known as Or Lady of the Most Holy Rosary of La Naval of Manila.

On October 6, 1646, the first celebration to honor the great victory was held in Manila. On April 9, 1662,  the Bishop in the Archdiocese of Manila declared the naval victory a miracle that was owed to the intercession of the Blessed Virgin Mary. Included in the declaration was the directive to celebrate, preach about, and hold festivities in remembrance of the miracles brought by “Our Most Blessed Virgin Mary and Her Holy Rosary.”

Five Popes have honored the statue and the miracles it brought forth:

Today the Santo Domingo Church is known as the National Shrine of Our Lady of the Most Holy Rosary of La Naval de Manila. Prior to the statue’s Canonical Coronation more than 310, 000 people donated jewels, gems, gold, and silver to adorn the statue.It is considered the oldest ivory carving in the Philippines. The church is the largest in Manila and one of the largest in all of Asia.