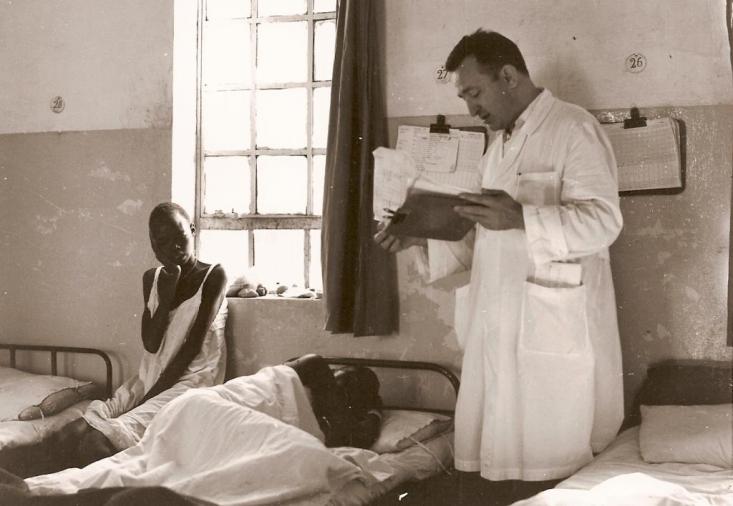 The woman was only twenty years old and was dying of Septicemia (blood poisoning). It was October 25, 2008, and on that day, her baby had already been lost, and Lucia Lomokol, seemed destined to follow her child in death. All means known to the doctors to reverse Lucia’s condition had failed, and there was no hope to save her.

Doctor Eric Dominic, a physician from Turin, reached into his pocket and pulled out a small prayer card. It was the holy card of Servant of God, Father Giuseppe Ambrosili. Doctor Dominic placed the holy card on Lucia’s pillow and asked the young woman’s relatives and all else who were present to pray to Father Guiseppe for Lucia’s recovery. They all did as requested, and the next morning, Lucia Lomokol was alive, well,  and her infection was gone.  No one thought such a thing was possible.

Giuseppe Ambrosili was born on July 25, 1923, in Ronago, Italy, a small town in northern Italy five miles from the Swiss border. He was the seventh son of Giovanni Ambrosili and Palmira Valli. Guiseppe did well in grade school and went to high school in nearby Como, Italy. In 1942, after finishing high school, he moved on and attended the College of Milan, but World War II disrupted his studies.

He became part of the Italian underground, and in 1943 he pledged to help save as many Jewish people.  Giuseppe and others worked clandestinely to hide them and get them safe passage to the Swiss border. The alternative for them was the concentration camp. If Giuseppe or his cohorts had been caught it would have meant their immediate execution.

Giuseppe did survive the war.  His ultimate calling had always been to the priesthood, but in 1946, he returned to the College of Milan. On July 28, 1949, he was awarded a degree as a Doctor of Medicine. Giuseppe then headed home to the seminary located in Venegona (also in northern Italy) to study to receive Holy Orders. He was ordained a priest on December 17, 1955. The Archbishop of Milan presiding over his ordination was Archbishop Giovanni Montini, who would become Pope St. Paul VI.

He was now a priest who had also been schooled in medicine and surgery. He then moved on to get a Tropical Medicine Diploma with the goal of eventually tending to the poor and deprived in Africa. Upon completion of his training, he announced to his mother and the rest of his family that his ultimate calling was to be a missionary. He told them, “God is love, they are suffering neighbors, and I am their servant.”

He became part of the Congregation of the Comboni Missionaries, and in 1956 he left for Africa. He was sent to a  small village in a town called Kalongo. This was located in northern Uganda, and he was put in charge of the medical dispensary at the outpost. He would remain at this place for the next 32 years.

During Father Giuseppe’s tenure at the dispensary, he transformed it into the Kalongo Hospital. Leprosy (Hansen’s Disease) was quite prevalent at the time, and the lepers were kept isolated in a place called the “leprosarium.” Care at these places was of poor quality, so Father Giuseppe began the “St. Mary’s School of Midwifery” training Ugandans to be the caregivers of the lepers.

Father Giuseppe transformed the methods for leprosy care. The first thing he did was acknowledge those with leprosy were, foremost,  people with an illness. These people deserved the same dignity and treatment as all others. Then he incorporated the ‘leprosarium” into being part of the hospital. The lepers became patients like all the other patients, and Father made sure they were treated as such.

In February of 1987 an insurrection erupted in Uganda, and Father Giuseppe and his hospital had to be evacuated. The hospital was burned to the ground by the insurrectionists. The humble priest, who only wanted “to be His servant for people suffering,” died March 27, 1987, at the Camboni Mission in Lira. The cause of death was kidney failure. (A little bit of “heartbreak” probably was also involved).

Today the Kalongo Hospital is called the Dr. Ambrosili Memorial Hospital. It has 350 beds and treats more than 60,000 people a year. He is remembered in Uganda as the “Doctor of Charity.”