Women settlers in Australia faced a life of prostitution, but Venerable Caroline was able to save many of them. 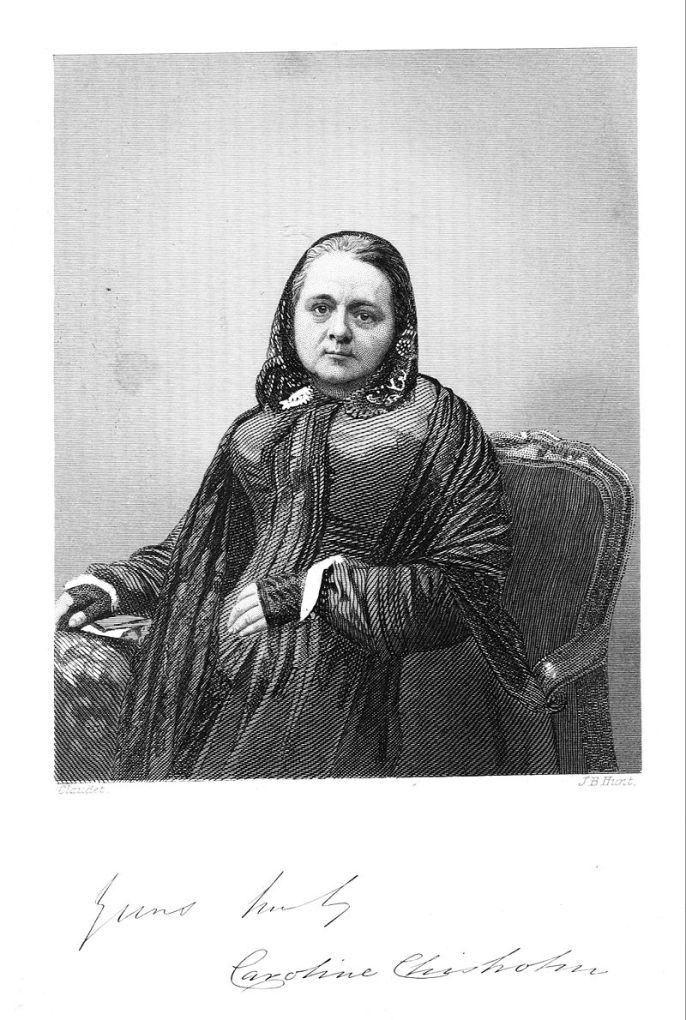 She was called “the Savior of Living Cargoes”

Caroline Chisholm was born in Northampton, England, in 1808. She was the daughter of William Jones, a wealthy farmer, who had been married four times. Three of his wives had died in childbirth, and Caroline’s mom was his fourth. She had seven children and Caroline would be the last. Her dad died when she was only six and he left the family some money and several properties to divide among the twelve surviving children. A prime lesson Caroline and her siblings learned from their father was to be generous and caring to those in need.

By the time Caroline was seven, she was displaying a pronounced interest in immigration. She had listened to the stories shared among the older people that frequented her home. These folks  included farmers, writers, religious and political leaders.  She invented her own immigration game using a washbasin as the ocean and boats made from pea-shells. She saved her money and purchased small dolls and would place them in the “boats” and send them “across the sea” to their new homes. This early interest in immigration would never leave her. It would only translate into a lifelong endeavor of caring and helping poor immigrants.

When Caroline was 22 years-old Captain Archibald Chisholm proposed marriage to her. Captain Chisholm was thirteen years older than Caroline and a devout Roman Catholic. Raised Protestant during an era when Catholicism was viewed with enormous suspicion and distrust, Caroline faced a hard choice.  She did want to marry him, but she had a significant concern, and it was not his Catholicism. Caroline insisted that she must always have the freedom to persevere in any philanthropic cause she chose. Archibald Chisholm readily agreed.

Caroline and Archibald were married on December 27, 1830. Deeply in love, Caroline soon converted to Roman Catholicism. Some suggested this was done for convenience. On the contrary, she embraced Catholicism and came to love her faith deeply. As one of her biographers wrote, “she was a MOST devout Catholic.”

Britain had established a penal colony in Australia in the latter part of the 18th century. Here they would send convicted criminals. Later on, they would begin sending people from England known as “free settlers.”  Many of these were single women who would arrive with little or no  money. They also has no  friends, family, or jobs and, desperate to survive, would turn to prostitution. The “welcoming” they were receiving at their “new homeland” was deplorable.

In 1838, Captain Chisholm was granted a transfer to Australia because of health problems. At the time, it was thought that the climate was better there. When they arrived and Caroline saw the wretched circumstances and conditions that greeted the poor migrant women who were there and still coming, she was appalled. She knew she had to help them. Her life’s work could not have been more clear.

Caroline was 30 years old and immediately began planning a course of action, developing job schemes, and lobbying the authorities for better working conditions. She started a group that set out to establish a woman’s shelter for migrants. In 1841, she had established the Female Emigrant’s Home in Sydney. Besides providing shelter, it also assisted unemployed young women in finding work not only in the city but even out in rural areas where work was more plentiful.

Deeply sympathetic to young women who were alone, Caroline wrote letter after letter seeking jobs for the girls and found many, especially as domestic servants. She would often accompany them to the far off places to make sure they were a safe haven for them. As time passed by, Caroline began housing men and then families. In her first seven years in Australia, she helped more than 11,000 immigrants.

Caroline Chisholm’s compassion, faith, and untiring devotion to the poor and lonely in a new country left an indelible mark on not only Australia and Great Britain but on the entire world. She is held in such high esteem that her picture is on Australia’s original $5 banknote. She was also awarded posthumously, the Order of Australia.

Caroline passed away on March 25, 1877. She was 68 years old. Her cause for sainthood has been put forward by the Archdiocese of Melbourne. The first Australian saint, Mary MacKillop, was canonized by Pope Benedict XVI in 2010. It is expected that Caroline Chisholm will be the second saint canonized from “down under.”