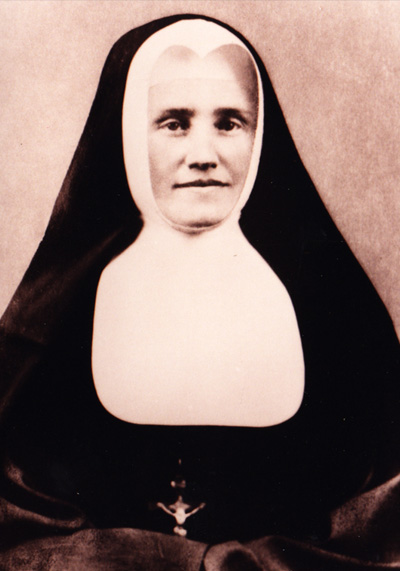 “Everything turns out for the best for those who seek the will of God.”  Blessed Marie Elisabeth Turgeon

Elisabeth Turgeon was born February 7, 1840, in Beaumont (Quebec) Canada. She was the fifth child of nine that would be born to Louis-Marc Turgeon and Angele Labrecque. Elisabeth was always sickly but was blessed with a brilliant mind. When she was 15, her dad died. Consequently, her schooling was put on hold because she had to stay at home to help her mom with the younger children.

Five years later, Elisabeth was able to return to school and she began studying to be a teacher. She entered the Ecole Normale in Quebec and graduated in 1862 with her teaching credentials. She went on to teach is Saint-Romuald and in Sainte-Anne-de-Beaupre. But someone else had his eye on her. His name was Monsignor Jean Langevin, who was the Bishop of the Rimouski Diocese, a city in Quebec. He recognized her qualities and wanted her to begin training qualified teachers for his diocese.

Elisabeth’s plans were once again put on hold. This time it was because of her bad health. There was never a definitive diagnosis but she lost all her strength and had to fight hard to regain it. During her recovery time, she tutored children on a one-to-one basis. She also turned to St. Anne and asked for her help, promising to teach for free if she helped cure her.

Slowly but surely, her health improved and Bishop Langerin contacted her again asking for her help. He wanted her to direct the small community of teachers he had put together in his diocese. She was afraid of her health deteriorating but accepted the position believing it is God’s will to do so. The deciding factor for Elisabeth was that the bishop wanted this group to become a religious order. Ironically, Elizabeth always believed that her ultimate calling was to be a teaching nun.

On April 3, 1875, she accepted Bishop Langevin’s invitation and joined the small group of women who the bishop had chosen to start this new ministry in his diocese. The group was called Soeurs de Petites Ecoles which means Sisters of the Little Schools.  Elisabeth was appointed to be their director. Their initial mission was to dedicate themselves to the education of the poor children that were spread all about the surrounding countryside.

Elisabeth set to work establishing schools in the vast Diocese of Rimouski. It was a daunting task as much of the area was newly settled Canadian wilderness. But within a few years, five schools had been established in five different towns.

On September 12, 1878, with Bishop  Langevin’s approval, she renamed and established her order calling it the Congrégation des Sœurs de Notre-Dame du Saint-Rosaire meaning Congregation of the Sisters of Our Lady of the Holy  Rosary.

On September 12, 1879,  Elizabeth and twelve other ladies made their formal vows. Elisabeth was appointed Mother Superior and from that point on, was known as Mother Marie Elisabeth Turgeon or simply, Mother Superior.

Mother Elisabeth’s health was deteriorating rapidly and by March of 1881, she was mostly bedridden. By August, she was dying and on August 15, the Feast of the Assumption, she was anointed and met with the members of her order to bid farewell. She died on August 17,1881. She was 41 years old.

Mother Marie Elisabeth was declared Venerable by Pope Francis on October 11, 2013. In September 2014, a miracle was attributed to her intercession. Then on April 26, 2015, she was beatified at the Cathedral in Rimouski by the official representative of Pope Francis, Cardinal Angelo Amato.