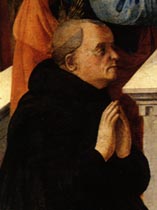 Philip Benizi was born in Florence on the Feast of the Assumption, August 15, 1233. (The Feast of the Assumption was declared a dogma of faith by Pope Pius XII in 1950. However, celebrating the day has been traced back to as early as the third century). That same day the Order of Servites was founded by the Mother of God. Even as a small child, this was the Order that Philip wanted to join. His father was against this and insisted to Philip that he was not worthy of such a calling. Philip succumbed to his father’s influence and began to study medicine. He studied for several years in Padua and Paris, earning doctorates in medicine and philosophy.

He began to work as a physician but never stopped thinking about his vocation. It was the Thursday after Easter when Philip went into the Chapel of the Servites located on the outskirts of Florence to attend Mass. During the reading of the Epistle, the words, “Draw near and join thyself to the chariot.”  Philip, hearing these words, went into ecstasy and found himself out in a wild and dangerous wilderness. He looked for a way to get out and save himself. He looked around but saw no escape. Then he looked up and saw the Blessed Virgin, above him in a chariot. She held in her hand the habit of the Servites. Philip immediately knew what he had to do and headed to the dwelling of the Seven Founders and asked to be accepted as a lay-brother.

Philip was readily accepted and began to work as diligently and as faithfully as he could. His knowledge and holiness were so evident that those who knew him convinced him to become a priest. He tried to oppose them but finally accepted their advice. He was ordained at Siena in 1258. Once ordained, he became zealous in his love of the priesthood and his quest to serve the Blessed Virgin.

Philip became the Superior to several houses and, in 1267, was elected Prior General of the Servite Order. As Prior General, he ordered his Servite members to travel about and preach the Gospel and spread devotion to the Blessed Virgin. From city to city and town to town, the Servites went, spreading the Word and encouraging devotion and honor to Our Lady.

Philip was humble and highly intelligent, with his humility always staying in charge. This character trait obtained for him the highest regard from both clergy and laity. Philip did not realize what kind of effect he had on those around him. When the Cardinals assembled in Viterbo to elect a new pope, they could not agree on whom to choose. Eventually, after lengthy discussions, they unanimously chose Philip.

When Philip heard of this, he fled into the mountains. He found a cave to hide in and stayed there until a new Pope was elected. He could not understand why these lofty churchmen would consider choosing him. The year was 1271, and the man elected to the papacy became Pope St. Gregory X.

During the thirteenth century, Italy was ravaged by civil wars. Father Philip Benizi’s preaching was one of the prime reasons peace was restored. At the Council of Lyons, he spoke to the many prelates and did so using the “gift of tongues.” Known for performing miracles, he met a leper on the road and gave the man his cloak. When the leper put it on, his leprosy vanished.

Philip’s body was getting weaker, and he went to the convent at Todi to finish his earthly journey. On the feast of the Assumption of Our Lady, he preached his last sermon. It was so eloquent and persuasive people in the congregation wept. When he had finished, he was overcome with fever, which he regarded as a sign of impending death. He asked his helpers to carry him to his apartment. He would spend the last days of his life in prayer, repenting of his sins, and asking if he might be admitted into heaven.

After receiving the Sacraments, he asked all those present to pray the litany of the saints. He had been born on the Feast of the Assumption, August 15, and he died on August 22, 1285. That was within the Octave of Assumption. He was 52 years old. He was canonized by Pope Clement X on April 12, 1671.

Saint Philip Benizi, pray for us.

2 thoughts on “Hearing that he might be elected Pope, he hid in a cave until the election was over; meet St. Philip Benizi”