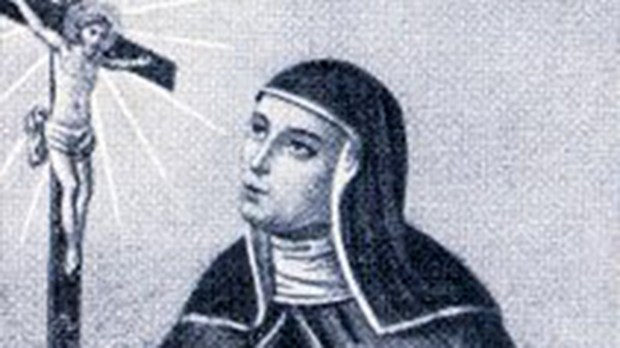 After Our Lady of Loreto obtained her healing, Blessed Maria Llong devoted herself to the poor.

Maria Llorenca Llong was born in Lieida, Spain, in 1463. Born as Maria de la Estirpe, she was the daughter of the noble Requences family and a descendant of a famous Spanish navy captain. In 1483 she married the prosperous lawyer Juan Llong, a friend of Ferdinand II, the Catholic king of Aragon.

During her early married life, tragedy struck young Maria. An angry servant, obsessing over how Maria had scolded him for an infraction of his duties, poisoned her by pouring a deadly mix into her wine glass during a family celebration. The servant failed in killing her, but Maria suffered intense pain and wound up paralyzed, unable to walk.

In 1506, King Ferdinand appointed Maria’s husband, Juan, as the Viceroy of Naples. Despite her condition, she and Juan moved to Naples. But Juan Llong died suddenly in 1509, leaving Maria with three children to raise. She was only 43 years old.

Possessing a great devotion to the Blessed Virgin, Maria decided to make a pilgrimage to Loreto, Italy. Today it takes close to four hours to make the journey by car. Maria had to be carried on a litter with three young children in her care. But she was sure Our Lady would help her.

Maria arrived in Loreto and attended Mass.  While saying prayers of thanksgiving, she experienced a complete cure for her paralysis. She just knew that the Blessed Mother had interceded for her and believed it was a sign from Jesus to devote herself to Him and all of mankind.

Soon after, she put on the habit of a Third Order Franciscan and began calling herself Maria Lorenza. Many thought she took that name because of her devotion to St. Lawrence, who was so devoted to the poor. Nothing can confirm that. But she did return to Naples, arranged for her children to be cared for, and began going about the city helping the sick and the poor the best she could.

In 1519, as a Franciscan tertiary, she established a hospital called  Santa Maria del Popolo and also founded a house to care for prostitutes. She dreamed of starting a convent and calling it Santa Maria in Gerasalamme. It would follow the efficiency and austerity of St. Francis of Assisi and St. Clare. Her goal was to stay as simple and as humble as possible.This was in 1526.

The noted philanthropist, Ettore Vernazza, joined forces with Maria in Naples. They combined their resources and built Santa Maria del Popolo dei Incurabili (Hospital of the Incurables). This facility, meant to treat those with chronic and incurable illnesses such as syphilis. It had a pharmacy, housed a research lab, and provided accommodations for patients’ relatives. Before long, doctors were coming from all over Europe to get the drugs sold there and review the ideas brought to life at this place.

Following Matteo da Bascio, the founder of the Capuchin monks, Maria started a new order called the Capuchin Poor Clares. Similar to the monks, the nuns wore a simple brown tunic with a cord at the waist and a short cape. Members became known as Capuchinesses. Maria wanted to start the order along the lines of St. Clare of Assisi by following a similar plan as used by St. Clare back in 1212. Maria chose as her spiritual director, St. Cajetan.

Maria’s devotion to her patients was so great that she moved into the hospital to be near them. After a time, services were offered for pregnant women. Sister proclaimed, “Any woman, rich or poor, patrician or plebian, indigenous or foreign, while pregnant, may knock on our door and it will be opened.” Many women were saved because of the expert Caesarean sections perfomed by the hospital’s doctors.

Sister Maria sought papal approval for her new order and on February 19, 1538, Pope Paul III, issued his approval. The official founding was done on December 10, 1538. In addition to the founding, numerous papal privileges were given from Pope Leo X,  Pope Adrian VI, and Pope Paul IV.

Sister Maria Llorenca Llong passed away on December 12, 1539. She was 76 years old. She was declared Blessed Maria Lloorenca Requenses Llong on October 9, 2021 in Naples, Italy by Cardinal Marcello Semeraro by the authority of Pope Francis.