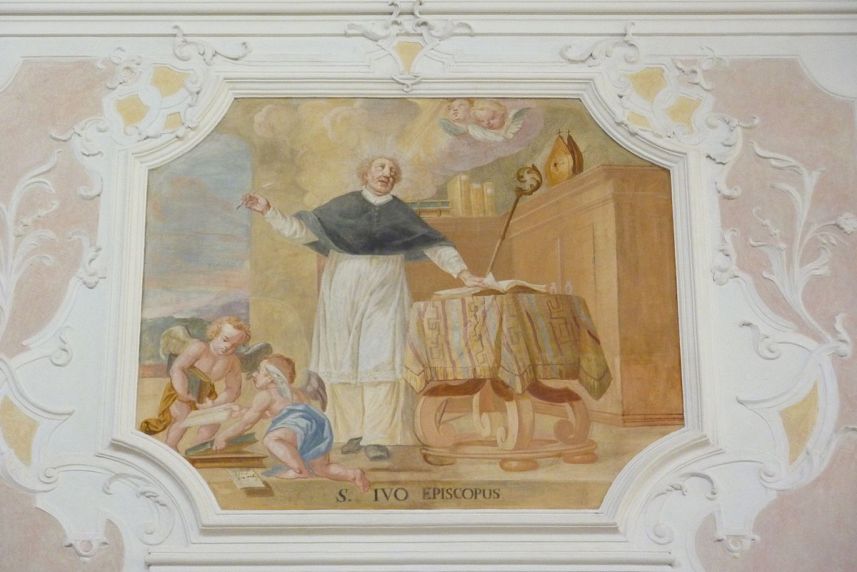 His name was quite unusual; it was Yvo.  He was born in the year 1040 near Chartres, France, which is why he is called Yvo of Chartres. Not much is known about his family background and his adolescent life. The documented history of his life seems to begin when Yvo became a student in Paris and began studying at the Abbey of Bec in Normandy, a Benedictine Monastery.

It was at the  Abbey of Bec that Yvo studied alongside Anselm of Canterbury, a man who would become a saint and a doctor of the church. Anselm and Yvo became good friends, and both men learned from each other. Yvo was still an unknown quantity but that began to change when he was ordained a priest.

His reputation as an outstanding teacher spread and his firm stand against religious abuse of power quickly became noticed. In 1080, at the request of the bishop, Yvo was sent to Beauvais to teach Canon Law at the Abbey of San Quentin. During his years at the Abbey, he established himself as one of the best teachers in France.  Under his guidance, the Abbey of San Quentin came to be recognized as the preeminent school of sound theology.

While here he established himself as a staunch opponent of the practice of simony ( making a profit by selling church goods and services), which at the time,  was being used by many of those within the religious ranks. In the year 1090, Yvo was appointed Bishop of Chartres. This appointment came because of his high standards, sound judgments, and humility.

His episcopal directives and rules were spread over a period of twenty-five years. During this time, his writings became well known and admired. He was always faithful to his duties, respectful of all people, loyal to the papacy and his country. At the same time, he never failed to disapprove of what he considered sinful and/or against church dogma.

Yvo was the ‘go-to guy” on matters about theology, liturgy, and political issues. But what he was most sought out for was his opinions and decisions relating to canonical matters. For example, during the period in the church, there was a situation that was causing a great division among the ruling class and the church hierarchy. It was called “Investiture.”  This differences became so intense that it developed into an actual struggle for supremacy between the monarchy(s) and the church.

Investiture was the practice of allowing the rulers to have the choice of whom to invest as bishops and abbots.  They would choose them and install them into office presenting them with their symbols of that office. When the church leaders objected to this practice there was a huge controversy that developed between the laity and the ecclesiastics. The ruling class believed this was their right. The papacy disagreed. It was Yvo of Chartres who wrote the opinions that were finally accepted by all parties at the Concordat of Worms in 1122. Thus was the end  of the practice of “Investiture.” His work stands to this day.

Yvo of Chartres left behind volumes of writings mostly covering three categories; canonical writings, sermons, and letters. The letters alone number 288. These letters all dealt with canonical and dogmatic questions and were predominantly based on the virtue of Caritas (charity). His canonical works were called the Collections of Ancient Canons and included twenty-five volumes dealing with the topic.

Yvo wrote most of his existing works while he was Bishop of Chartres. He became known as one of the greatest scholars of the medieval era and became a famous religious figure. He died on December 23, 1115, at the age of seventy-five.

Yvo of Chartres was beatified by Pope St. Pius V on December 18, 1570. His exact date of canonization is not known but he considered a canonized saint. He is the Patron Saint of Canonists. His feast day was December 23 (his date of death) but it has been moved to May 23.

St. Yvo of Chartres, please pray for us.